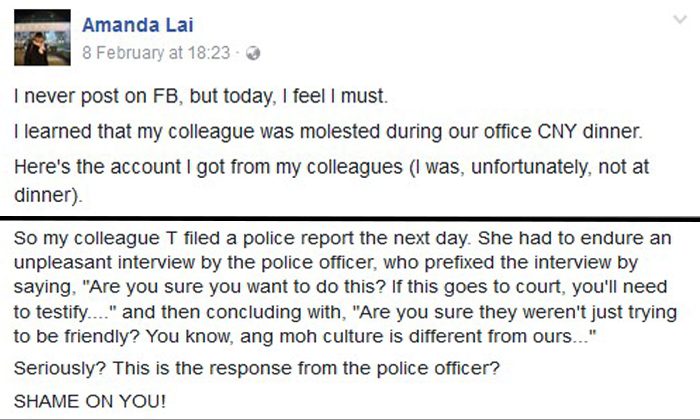 A woman's Facebook post describing an alleged case of molest and how a police officer had reportedly responded inappropriately when a report was lodged has gone viral online.

According to the Feb 8 post by Facebook user Amanda Lai, the incident took place on Feb 3 at around 9.30am, during an office Chinese New Year dinner at Mouth Restaurant on Cross Street.

She said that two of her colleagues, T and R, had been returning from the restroom that was located 20 metres away from the restaurant's main entrance when their path was blocked by two men.

Lai wrote, "They announced that they were from Portugal after trying to guess T and R’s country of origin, and blocked T and R's way back to the restaurant.

"One of the 2 men then proceeded to harass T her and asked her to take her shirt off and show him her boobs. T said 'NO' repeatedly, and instead of backing off, the man moved towards her, picked her up off the floor and molested her."

"Colleague T was shocked, afraid, and kept saying "No!", and had colleague R not grabbed onto her hand and screamed, the molester would not have put her down," she added.

A tussle apparently ensued after that, when the women's colleagues tried to prevent the two men from leaving.

At this point, the latter's colleagues "came out of the restaurant and pulled everyone apart, but the molester charged forward and headbutted one of my male colleagues", said Lai.

After the altercation, the women's colleagues had apparently approached the restaurant for information on the opposite party, but "they said that they would only disclose the company's name to the police."

T then went to make a police report the following day, but it seemed that her ordeal was far from over.

"She had to endure an unpleasant interview by the police officer, who prefixed the interview by saying, "Are you sure you want to do this? If this goes to court, you'll need to testify...." and then concluding with, "Are you sure they weren't just trying to be friendly? You know, ang moh culture is different from ours..."

"Seriously? This is the response from the police officer? SHAME ON YOU!"

Expressing fury over what the alleged perpetrator had done, how his colleagues had dismissed his "reprehensible behavior", as well as at the restaurant for not doing more to protect its customers, Lai added that she was "most disappointed by the fact that the police officer who took my colleague's statement, didn't take her complaint seriously."

According to a statement from the Singapore Police Force on their Facebook page, a 37-year-old Portuguese man has been arrested in relation to the alleged molest case.

They also said that they are "aware of allegations that some inappropriate comments were made by a female Police officer" when attending to the complaint.

"The Police are looking into the matter," added the statement.