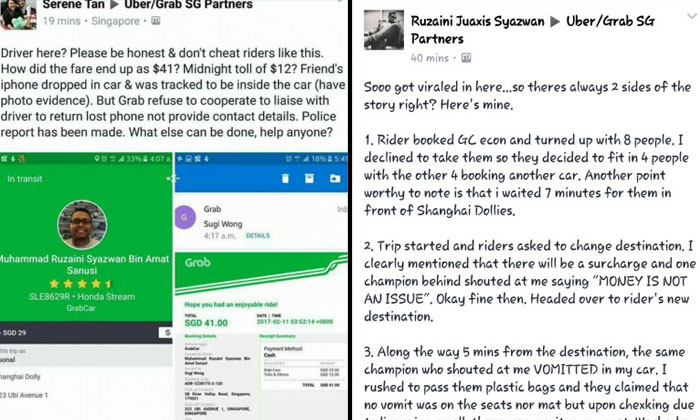 A Grab driver has responded to a post put up by a rider accusing him of 'cheating' her and refusing to help return a lost phone.

Serene Ng had posted in the Uber/Grab SG Partners Facebook page calling out her driver, Ruzaini. She wrote:

"Please be honest and don't cheat riders like this. How did the fare end up as $41? Midnight toll of $12?

"[My] friend's iPhone dropped in [the] car and was tracked to be inside the car (have photo evidence).

"But Grab refused to cooperate to liase with driver to return lost phone [by] not providing contact details.

"Police report has been made. What else can be done, help anyone?"

The driver decided to post his own account of what happened the night that he picked Serene and her friends up from in front of Shanghai Dolly.

Stomper Spidey, a fellow Uber and Grab driver, sent Stomp screenshots from the closed group posting believing that it's only right that both sides of the story are told:

"The reputation of the driver is being tarnished. Please help him clear the air, that's all I ask for. After all, I'm an Uber and GrabCar driver too."

Ruzaini wrote that the group of 8 had booked a GrabCar Economy so he initially declined to take them.

They then decided to split the group, so the other four made another booking.

He said that he also waited for them for seven minutes when he is only obligated to wait for two.

After the group boarded, they requested to change their destination.

He said: "I clearly mentioned that there will be a surcharge and one champion behind shouted at me saying, "MONEY IS NOT AN ISSUE."

While he was en route to the new destination, the same guy who spoke up vomitted in his car.

"I rushed to pass them plastic bags and they claimed that no vomit was on the seats nor mat but checking due to the lingering smell, there was vomit on my mat. I washed my mat and didn't tak up the issue with Grab.

When Grab called him regarding the lost phone, he reported that he could not find it.

However, when he cleaned the car the next morning, he found the phone in the third row of his 6-seater car.

He then returned the phone to a police station as the Grab office was closed.

"So I put forward to you this question, Ms Serene Tan, was a $12 surcharge justified for what should have been $6 for waiting, $5 for change of destination and $50 for a proper cleaning of the car?

"I'm assuming you are in this group, Ms Serene Tan, so I give you and your group 24 hours to reach out to me. Failing which I will lodge a police report under POHA (Protection from Harassment Act).

He added at the end that the 'best thing' about the trip was that the fare was paid in cash and the rider tipped him a dollar.