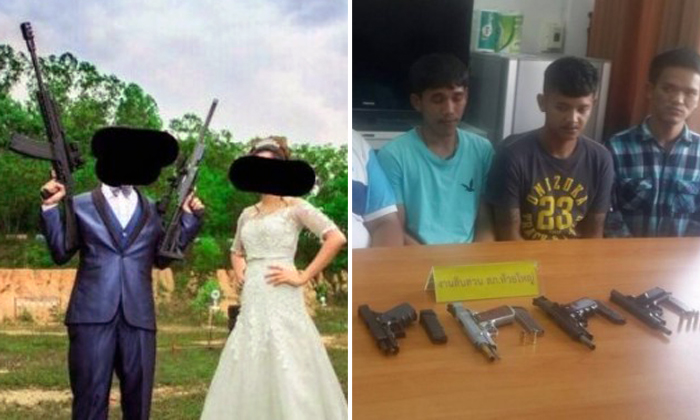 Five men were charged over death of bystander who was accidentally shot in Thailand.

Sunday (Feb 26) should have been the happiest day for a bride and groom in Chon Buri.

But it turned out to be a tragic one for an innocent couple after wedding guests began firing weapons into the sky - which led to the death of a man in Bang Lamung district.

Five men have surrendered to police over the killing of Thanet Inthawong, 36, in what appears to be a senseless tragedy all-too common in Thailand.

Police said the five suspects may just be some of the wedding guests who endangered the public during the raucous celebrations.

The motive for the barrage of bullets appeared yesterday to be misguided revelry rather than murderous intent, reports The Nation.

The indiscriminate shooting of firearms is common, although it may seem shockingly inappropriate during celebrations such as weddings and ordination days in many parts of the country.

The legal ban on such behaviour seems to have little effect.

In this latest case, the groom, who remains unidentified, is known to be a gun lover.

Wedding invitations showed him standing with his bride while holding two assault rifles, with a message that said: "All are welcome to my wedding if you are free."

The victim, however, did not attend the wedding but was minding his own business at his place of work.

Weerawan Supachon-ayu, 45, Thanet's girlfriend, told police she was sitting with her boyfriend at a shop where he worked in Banhuay Kainao village when sounds of the celebration were heard from about 50 metres away as the wedding procession approached.

She said she told her boyfriend, who was about to leave the shop, to wait for the procession to pass by.

At the same time, she heard several gunshots.

The shooting continued as the procession continued by, Weerawan said, when suddenly she heard Thanet cry out and saw him fall to the ground.

He was unresponsive as she tried to help him, prompting her to call for help to take Thanet to hospital, where he was declared dead with a bullet wound to his chest.

Another man at the scene, Supalert Horphet, said he had shouted at the oblivious wedding guests, telling them to stop firing but they only ceased after he told them a man had been hit by a bullet.

Five men who were guests at the wedding had surrendered to police and submitted to questioning before being held without bail.

Police planned to arrest more suspects after it was reported that about 10 guests at the wedding had opened fire during the celebrations.

They told police they had fired their guns into the sky to celebrate their friend's marriage.

Police took the suspects' fingerprints and tested their hands for gunpowder residue.

Another man, Prasert Nopparat, 45, who surrendered separately, was charged with possessing a gun without permission because Wasin used his pistol in the shooting, said Huai Yai superintendent Colonel Anan Phurahong.

Police also seized four guns including three licensed 9mm pistols and an unlicensed 11mm pistol with plans to test them to determine which gun killed Thanet, said Anan, adding that the test would take about 10 days.

Recklessness resulting in death carries a jail term of not more than 10 years and a fine of up to Bt20,000.

Thailand has a bad history with "celebratory" gunfire.

A similar incident occurred in July 2015 in Phetchaburi when a man attending a monk-ordination procession was carrying a gun that accidentally discharged and a bullet killed one of his friends.

On December 29, a mother and child narrowly escaped death after a stray bullet from a New Year celebration struck near them at their home.

In Angthong province, a young man firing a weapon during another monk-ordination celebration killed a 32-year-old female bystander on March 2014.