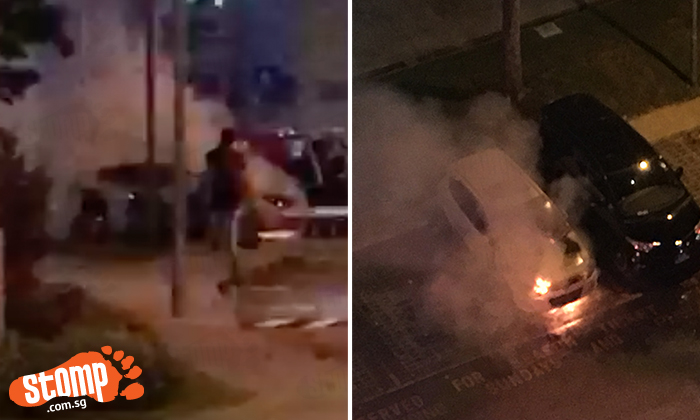 Stomper Jenny was dining at a coffeeshop on Block 138 Tampines St 11 yesterday (Jan 9) at around 8.55pm when she noticed a pungent smell of smoke that started causing a commotion among the coffeeshop patrons.

Upon following the crowd, she found thick smoke being emitted from the bonnet of a white car parked in the Block 113 Tampines St 11 carpark, and took a video of the incident.

She subsequently uploaded her video to Stomp.

“There was a lot of smoke, and we initially thought the smoke was coming from the building.

“Only as we got closer did we see the burning car.

“There didn’t seem to be any injuries as the car owner was not in the car, and the fire was put out by the authorities within 15 minutes.

According to a friend of Jenny, the car owner and family members were alerted to the fire after the incident and came down to survey the wreckage of their car.

Stomper Azlan and Marcus were also in the vicinity and submitted their photos to Stomp.

The Singapore Civili Defence Force (SCDF) has issued an official statement on the incident, saying that it was alerted to the fire at around 9:24pm.

It dispatched two fire bikes and one fire engine to the scene, and the fire was extinguished using one hose reel and compressed air foam.