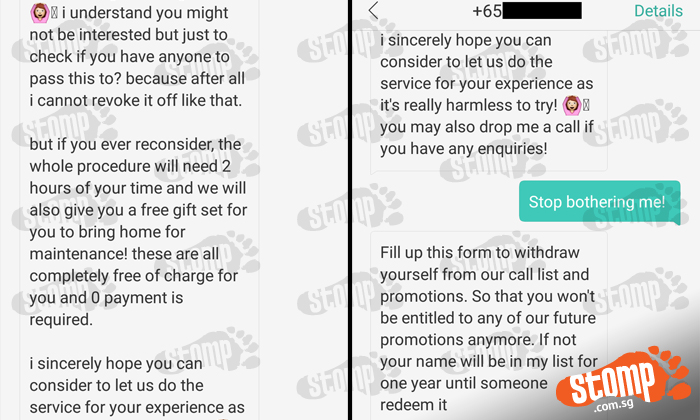 Most people hate being targets of the hard-selling tactic, whereby the other party refuses to back off until our resistance is worn down and we relent into signing up for products or services that we are not even that interested in.

Well, if you thought that was bad, then the experience that Stomper Miss Koh had with a local slimming centre takes things to another level.

According to Miss Koh, she had already received at least two or three calls from a female employee at the company, during which the Stomper said she politely declined their services.

However, she started getting multiple texts from the female employee, who identified herself as "Mabel from London Weight Management", causing her distress.

Mabel even asked Miss Koh if she had a referral to "pass this [the service] to" because she "could not revoke it just like that".

When the Stomper told Mabel to stop bothering her, the latter responded by telling to fill up an online form to withdraw herself from the company's call list and future promotions, "if not your name will be in my list for one year until someone redeems it".

Miss Koh, who sent Stomp screenshots of her conversation with Mabel, said:

"I'm getting CRAZY from this 'stalker', Mabel, from London Weight Management who can't seem to stop calling or messaging me to push me in getting their service.

"I know I'm not polite in the messages but that's because I'm used up all my patience. I'm not in the Personal Data Protection Act (PDPA) list because I'm receptive to trial deals and such. And most of the deals are really not bad.

"Being personally in the sales line myself, I understand sales people can be a tad pushy at times and I'm usually tolerant. But this is too much!

"In the first place, I DID NOT sign up for any deals or trials from London Weight Management. I think they got my contact through some online survey which I participated in.

"But I'm VERY sure I DID NOT tick that I'm interested in their deal at the end of the survey because the fact is I tried their trial once (maybe $38 or something) and did not find it effective.

"So the first message I'm trying to put across for is for online survey websites:

"Please be ethical enough not to disclose your participants' contacts to other companies (especially a desperate one), unless the surveyor expressed interest in the particular company/deal.

"I can go and dig up my history to see which unethical website did this, but I'm just giving one more chance. If I receive one more desperate stalker, I'm gonna dig my history out.

"Secondly, if ethics are breached and somehow you, as a service provider got a customer's contact and you really are so desperate, please only call once or message once, which is more than enough.

"I'm already kind enough to reject nicely twice on the phone. Why the need to bomb my phone with messages and demand a referral? That's simply ridiculous!

"And to stop this, you need me to fill up your company's form? Seriously!"