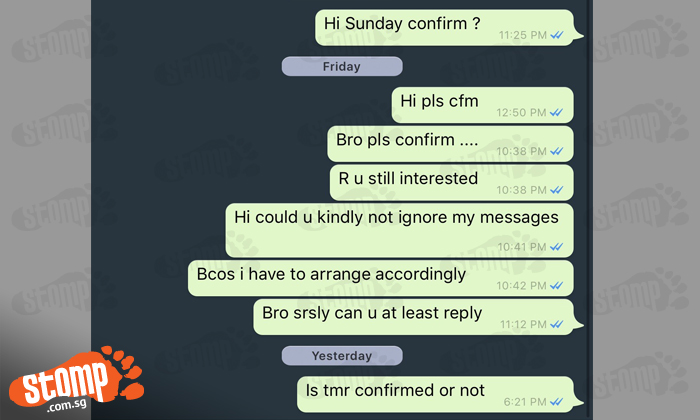 You know what is worse than being rejected or given an indefinite answer? Mixed signals, being ignored and led on, with no idea whether to move forward or hold on.

This applies to both love and business.

For Stomper qualitykia, it is the latter.

He and a buyer on Carousell had agreed to a transaction of $110 for his running shoes, and had agreed to meet at City Hall yesterday (Apr 16).

However, attempts by qualitykia to confirm the meet-up proved to be futile when the buyer suddenly stopped replying after Monday.

The Stomper's WhatsApp messages to the other party went ignored on Thursday, Friday and Saturday, despite the blue ticks indicating that they had been read.

Asked if he has heard anything from the buyer ever since, qualitykia told Stomp:

"No, he constantly ignores and BLUE-TICKS my messages. I tried calling him but he doesn't answer."

Here's a tip: Have the basic decency to say so and inform the other person even if you have changed your mind about something.