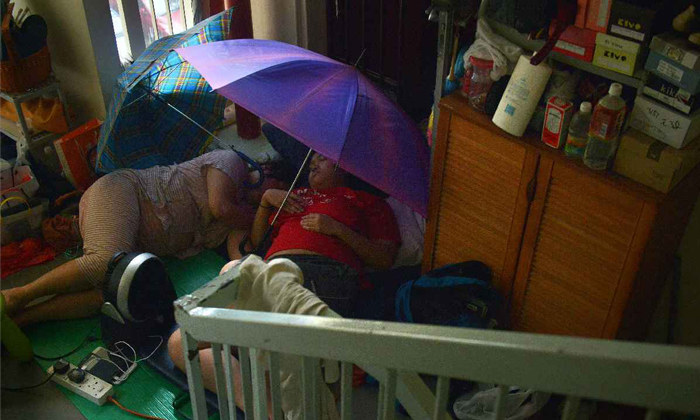 For the last two years, a mother and her grown-up daughter have been sleeping and even doing their dishes in the corridor outside their Ang Mo Kio four-room flat - because of all the clutter inside.

And their neighbours are increasingly becoming frustrated.

Madam Francisca, 65, and her 24-year-old daughter live in the fourth-floor unit of Block 254.

A couple in a neighbouring unit said the problem began about two years ago, after the lift was upgraded. "With the lift, they probably think no one needs to use the stairs any more," said Mrs Yuen, who has lived there for 18 years with her husband.

"They sleep outside each night, and lay their stuff out like it is a pasar malam (night market)."

When The Sunday Times visited the unit at 8am two Mondays ago, the mother and daughter were still sleeping outside on floor mats, covered by two umbrellas.

There was an electrical extension cord trailing out from the house and they used it to charge their mobile phones and plug an electric fan. The door was slightly ajar, but it was hard to see inside as it was dark. But there seemed to be tall stacks of items in the house. There was also a dank and musty smell.

When they woke up, the mother said she had to rush off to work and refused to be interviewed.

The view into the flat from the block opposite showed a haphazard collection of random items, some piled all the way to the ceiling.

Mrs Yuen said she has seen the duo wash dishes outside the flat using 1.5l water bottles. "They would pour away the greasy water, and some of it would flow over here."

A 65-year-old clerk, who lives in the unit directly above and wanted to be known only as Madam Thia, said: "I usually leave for work at 6am. Once, when the lift was spoilt, I had to use the stairs. But because they were blocking the way, I had to use the other staircase."

Madam Josephine Anthony, a 68-year-old retiree who has been living in the unit below for the last 19 years, said the mother and daughter attend the same church as she does and described them as nice people.

She said: "The daughter would call me 'aunty' whenever she sees me."

She has seen town council workers removing things from upstairs, but never realised there was a problem. A cleaner who cleans the block daily and has been inside the flat before said: "They have so many things. I offered to help them clear inside too, but they said no."

He added that the town council, which has jurisdiction over the common spaces, has served many notices to the unit. The latest one was sent on July 1. "Every time we serve a notice, they are given one week to pack up. If they don't, we will go and clear (the corridor). We have cleared plastic bags, bottles, containers and shoes."

He said that even when they cleared away some things, the pair would ask for the items back.

"This has happened many times," added the cleaner. "Once, they took back a baby car seat and children's shoes. The shoes were not even fit to be used any more."

He is also worried about the fire hazard the items pose.

The Singapore Civil Defence Force, in response to queries, said it inspected the area three weeks ago to check on the placement of items in the common areas, and then referred the matter to the town council for follow-up.

Nee Soon town council said it was first alerted to this about three months ago. It took over the block last December.

"The situation is complex as clutter within homes can spill into the corridors, and we do require the resident's cooperation in the matter," said a spokesman.

It managed to get the mother and daughter to clear most of the items outside their unit on July 4, and has been liaising with various partners to work with the pair to address the situation.

The Housing Board said it first received feedback about the situation in late February, and inspections were carried out together with various agencies. But it has not been able to assess the situation inside the flat as the main door was locked every time officers visited the flat.

"Compulsive hoarding is a behavioural problem which requires professional help," said an HDB spokesman. "Support from social workers or medical professionals for the hoarder is also required for a holistic and sustainable solution."

Mr Henry Kwek, an MP for Nee Soon GRC and the vice-chairman of Nee Soon Town Council, said he was aware of the issue.

"When such a situation happens, it inconveniences the neighbours," he said. "We are working with social workers and agencies such as HDB and town council to find how out to resolve the situation in a thoughtful manner."