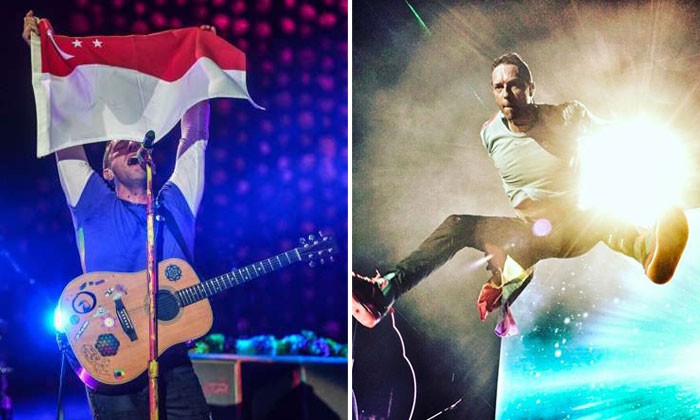 British band Coldplay had no idea about the controversies and drama surrounding the sale of their tickets for their fourth concert tour in Singapore.

Speaking to The Straits Times on Friday (March 31) straight after their soundcheck for the first of their two-day concerts at the National Stadium, lead singer Chris Martin and guitarist Jonny Buckland said that since they arrived here on Thursday, they had been rehearsing, playing and "attempting to sleep, mostly".

Tickets to their concert were snapped up in record time when they were released last year. More than 100,000 tickets to both nights of the show have been sold. The second night was added after the first sold out in a matter of hours.

Many who were unable to get tickets resorted to online resellers. Earlier this week, two men were arrested for their suspected involvement in a scam involving the tickets to the concert - they became uncontactable after money was transferred to them.

When told of all this, Martin, 40, said: "We were not aware of that, but that sounds cool. Sometimes our manager will say, 'We added another show', so I guess that means a good thing."

Neither were the band aware that thousands of their fans here had queued up for hours outside the stadium for good positions in the standing area. The first person in line started queueing at 6.30am.

"It seems like I've missed everything. We've been rehearsing," Martin said. "It's very meaningful to us that people show up anywhere, but particularly when it's on the other side of the world from where we come from. We never take it for granted."

Coldplay are more than midway through their Head Full Of Dreams Tour, which kicked off in Argentina on March 31 last year. After Europe and North American dates, it will wrap up in October.

The touring has not stopped them from putting out new music.

In fact, with Martin based in the United States and the rest of the band in England, their time on the road together is also proving to be a chance to jam and make new music together.

Buckland, 39, said: "We've just brought a studio on the road with us for the first time and we're quite excited about using that every day while on tour."

They will be releasing a five-track EP called Kaleidescope on June 2.

Two tracks have already been released, Hypnotised and Something Just Like This.

The latter, a collaboration with the Chainsmokers, an electronic dance music duo, broke YouTube's single-day streaming record with nine million views. But it has drawn ire from critics, saying that their music is "too commercial".

But the band are unfazed by the criticism. Martin said: "If you just judge us on our singles, you could say they've done a song with The Chainsmokers, that's very pop but the truth is we love that. We accept that whatever we do, someone won't like it and that's okay."

Buckland, 39, believes in change as well. "It's been important to us throughout, to try not repeating ourselves," he said. "If we tried to copy any one of our past albums it'd be a disaster."

Ultimately all their songs have to go through an "American Idol-type process" within the band, Martin said, half in jest, and it is not always about formulating smash hits.

"We don't 'design' our music. It's hard to explain because it sounds so pretentious, but songs just come from somewhere else, so we just do what they say. I know it sounds weird and crazy but it's true.