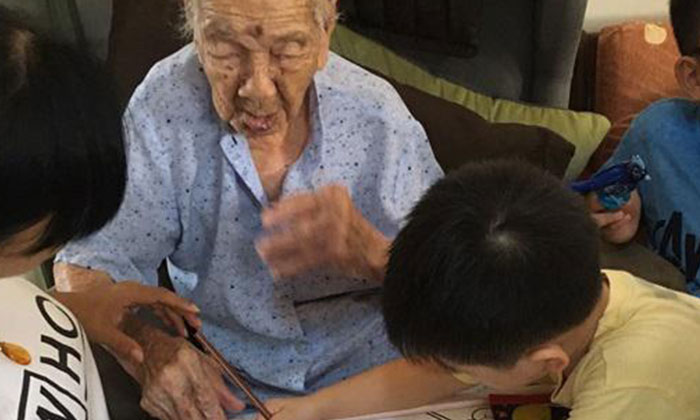 Children of a woman who lived to 105 years old said that she climbed the stairs to her HDB flat on the seventh storey and ate raw garlic daily.

The women passed away on Monday (Feb 6) at around 2am while she was warded in Tan Tock Seng Hospital, joining her deceased husband who had passed away 52 years ago, and a second son, reports Lianhe Wanbao.

She is survived by seven children - three daughters and sons - and her 70-year-old third son said his mother lived alone and was an independent woman:

“Even until she was 103 years old, she bathed and did the laundry herself.

“She was very healthy.

“However, during the last two years, her eyesight worsened and her legs became weaker.

“She was out of breath and would not eat last Tuesday (Feb 2).”

When asked about the secret to her longevity, her son said:

“My mum used to work in a farm, raising pigs.

“She had to do hard labour daily unlike the younger generation now who stay in aircon all the time.

“Even after moving to a flat from a kampong, she refused to take the lifts and climb the stairs daily.

“Whenever she visited us in our apartments on the third and tenth storey, she would also climb the stairs.”

The man also revealed that his mother loved eating raw garlic, and would eat it daily:

“The garlic probably had antibacterial properties.”

According to her, the lessons kept them both mentally active and prevented their mental faculty from degrading.

Related Stories
9 strange things your body does that you never knew were defense mechanisms
Great-granny's 'kiss of life' saves man who suffered heart attack at Eunos CC
US guy ends up with massive tumour-like growths on neck after getting cut by shaver
tips
health. healthy
longevity