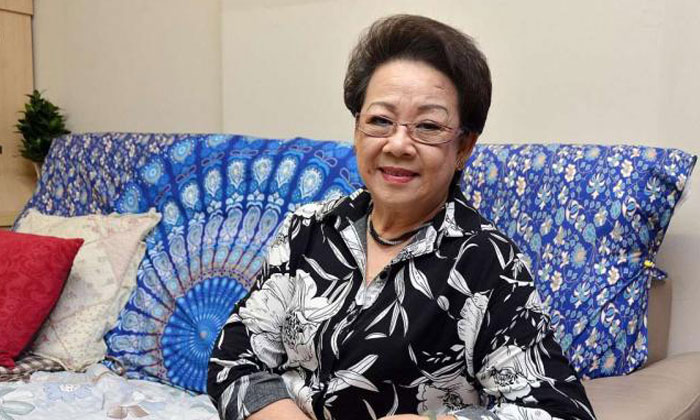 Like many Singaporeans today, Mr Tang Siew Loon will be hoping for continued prosperity and good health in the Year of the Rooster.

But as the 64-year-old looks ahead to an auspicious 2017, an event on Oct 22 last year will hold special significance for him.

"I am lucky to be alive," Mr Tang told The Straits Times.

Last October, the sales manager was at Eunos Community Club's Red vs White Karaoke Challenge when he suffered a heart attack.

Those seated next to him, including his wife, tried to resuscitate him but failed.

It was then that Madam Lucy Ying sprung into action.

The 71-year-old, who had performed earlier, was startled by the commotion at the table next to hers.

But she knew she had to act fast.

She rushed over to find Mr Tang, who had been on stage singing and dancing just minutes ago, slumped on his chair unconscious.

"I thought there had been a quarrel since people were drinking," she said in Mandarin.

"But I was shocked to see his face turning purple and his fists clenched. His wife was also shouting his name and crying hysterically."

Tilting Mr Tang's head up, Madam Ying gave him three breaths of air through his mouth.

"On the third breath, I used all my might and I saw his eyes open slowly," she said.

"I was so relieved."

Her "kiss of life" was recognised by the Eunos Senior Citizens' Executive Committee at an informal award ceremony on Jan 11.

About 13 family members, including Madam Ying's two great-grandchildren, were present as she was presented with a certificate for saving a life.

However, Madam Ying, a widow with four children and eight grandchildren, was quick to brush off any credit in an interview with The Straits Times at her Ubi home.

"I don't think I was being brave. It's a normal thing to help someone in need, even if he is a stranger," she added.

"I watch a lot of dramas on television and also go on Facebook, so maybe that was how I learnt to do it (resuscitate Mr Tang)."

The incident has turned the pair from mere acquaintances into friends.

In a video taken by Madam Ying's family members at the ceremony to honour the heroine, Mr Tang paid tribute to his saviour

"I had a lucky star, an angel, that night," said the father of four children aged between 20 and 26.

"She did not care what happened, she just 'jumped' onto me and gave me three 'kisses', saved my life.

"There must be a reason why I am still alive... Maybe I have not done enough good to society... I have done some reflection."

Doctors at the hospital later found five blocked arteries, including three major ones in his heart.

Mr Tang, who declined to be photographed, said he had to undergo an angioplasty, with stents inserted into two of his arteries.

Eunos Senior Citizens' Executive Committee chairman Tan Jun Hong, 34, said it was the first time it had handed out a certificate for "extraordinary personal action".

"Every little act means a lot and we should not forget about the kindness of individuals," he said.

"Madam Ying is a good example of how age does not matter when it comes to saving someone's life. She managed to save someone younger than her, and that is a big learning lesson for everyone," he added.

Madam Ying, who keeps herself active with taiji as well as ballroom and latin dancing, said she will now look out for cardiopulmonary resuscitation courses offered at the community club.

Mr Tang, who is still recovering and going for physiotherapy, said his new lease of life has made him more aware of his body and health.

He had been breaking out in cold sweat and feeling sleepy often before the incident, but dismissed it as work-related stress.

"I learnt the hard way that it is important to go for a check-up when you show any symptoms," said Mr Tang.