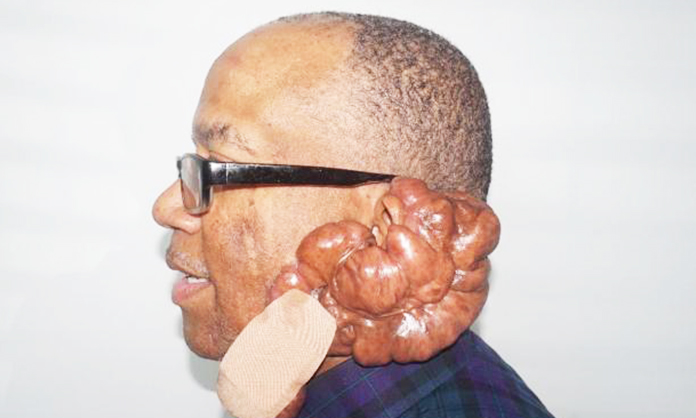 A desperate man is raising funds online for surgery to remove the massive scar tissues on his neck, after the tumour-like growths robbed him of living a normal life.

Keith Crowell from Milwaukee, United States, was getting a shave in a barber shop 12 years ago when he was nicked on both sides of the neck, The Daily Mail UK reported.

For most men, the small cuts would have healed nicely, but for Mr Crowell, keloids started to grow and envelop the back of his neck.

With these large growths, he has difficulties with swallowing and hearing.

According to the National Skin Centre (NSC), keloids are scar tissue that develop following skin injury.

There are some people who are more susceptible to this skin condition, such as those with darker skin tones.

And although the overgrowth of keloids may resemble tumours, they are not cancerous.

NSC said that these scar tissues are difficult to treat, and most treatments aim at relieving pain or itching, or flattening the lesions to make them fit in with the surrounding skin.

However, it was a temporary solution as the abnormal growths soon returned.

Besides the physical and emotional trauma caused by his condition, Mr Crowell was dealt another heavy blow by his insurance company which refused to pay for his medical treatment.

He said: "They rejected my claim saying it was cosmetic surgery. I feel it's not cosmetic. This is my livelihood. This is my life right here."

The man remains hopeful for a good outcome and recently told the media that he has found a doctor in New York who has performed similar operations with a 96 per cent success rate.