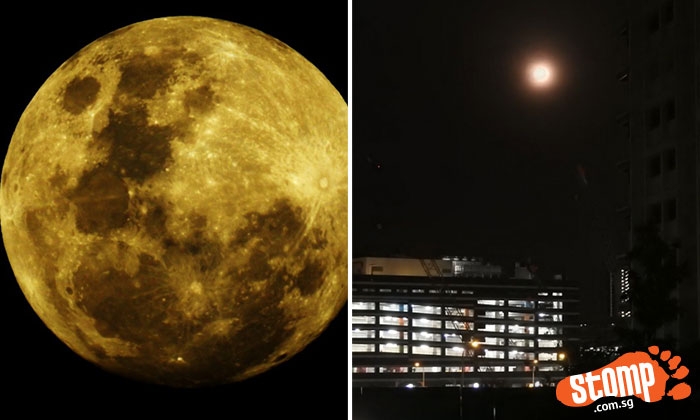 Stomper Kannan managed to capture an elusive Full Snow Moon on Friday (Feb 11) night, the fifteenth day of the first month in the Chinese Lunar Calendar.

“The fifteenth day is commonly called ‘Chap Goh Mei’ in Hokkien, and symbolises the last day of the Chinese New Year celebrations in Singapore.

“It is also known as Yuan-Xiao Festival and the moon is exceptionally bright and full on the day.”

According to Kannan, the native Americans refer to the phenomenon as the Full Snow Moon because the heaviest snow fall in the month of February, especially in the United States.

However, what made this year’s Full Snow Moon even more special was that it coincided with a penumbral lunar eclipse - A lunar eclipse that occurs when the moon becomes completely immersed in the penumbral cone of the Earth without coming into contact with the umbra - which was supposed to begin yesterday (Feb 11) morning at 6.35am.

However, the eclipse wasn’t visible in Singapore due to the moon setting in the west at the same time, and the cloudy weather conditions did not help, explains Kannan.

Nevertheless, the Full Snow Moon was clearly visible yesterday and the day before, and he managed to capture the full moon in its splendour at Woodlands and The Promontory at Marina Bay.

Take a look at the stunning pictures in the gallery below.

Related Stories
Check out the biggest Supermoon in 70 years: In Singapore tonight from 6.46pm to 9.52pm
Stomper's stunning photos of the third Supermoon of 2016
moon
beautiful
Full Snow Moon