Baby with rare complication home after four months in hospital 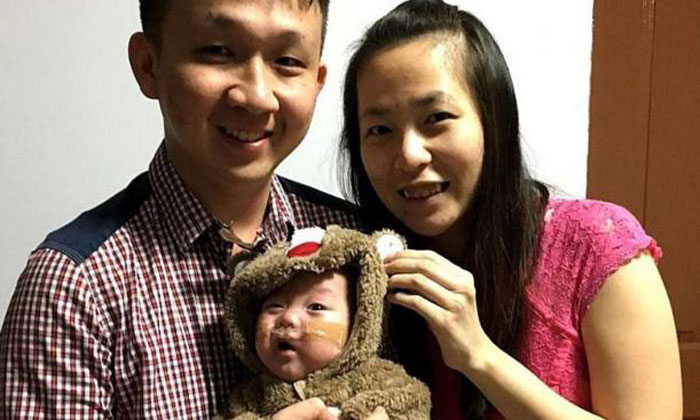 It is a special start to the year for Mr Michael Wahjudi and his wife Caroline. Their son Raphael, who was born in May, is finally home to ring in the new year.

The baby had spent all his life in the hospital until he was discharged late last year.

Mr Wahjudi, 30, told The New Paper: "I think he's happy. He's smiling a lot now, and drinking much more milk than at the hospital."

The brothers were born three months premature, after their mother was diagnosed with twin-to-twin transfusion syndrome, a relatively rare complication that affects one in 1,600 pregnancies.

The condition happens in identical twins when there is transfusion of blood from one twin to the other through connecting blood vessels in the placenta, which they share.

The recipient twin, who is usually born larger, may have too much blood and may develop heart failure. The donor twin may have too little blood to develop healthily in the womb.

Both twins struggled with a series of health complications, including collapsed lungs.

But not without putting up a valiant fight, said Mr Wahjudi, a building consultant.

"There was one day when one of the doctors called us to say Gabriel was quite sick and may not make it, but he fought back and stayed for another three weeks.

"It's a big loss for us, but Gabriel did his best to be with us. So I think he's done a good job. At least he's not in pain any more," he said.

Gabriel's death left the couple grief-stricken, but they tried their best to channel their loss into positivity for Raphael.

"Till now, there's a hole in our hearts. Of course it's a big loss," Mr Wahjudi said quietly.

"But we just thought that Raphael still needed us to be happy and cheerful, to give him our support."

Although Raphael's condition gradually improved, there were a series of scares along the way.

Mr Wahjudi has watched his son's body turn blue and lifeless for a minute or two - a result of holding his breath. Doctors told Mr Wahjudi it was due to Raphael's chronic lung disease from long ventilator use.

Today, Mr Wahjudi and his wife monitor their son, who is on oxygen support, closely to make sure his oxygen levels do not dip to dangerous levels.

His wife quit her job to look after Raphael full-time.

Initial tests hint at gaps in the boy's development.

His first hearing test, for instance, indicates a degree of hearing loss, but will require further confirmation tests.

Raphael, who has grown up being tube-fed, is having difficulty swallowing milk too.

The focus for Mr Wahjudi and his wife is to make sure Raphael does not fall sick.

"It's a new beginning for all of us, but I know that our journey is not finished yet. At least Raphael is home and happy, and that's quite a big feat," he said.