Are you making foreign workers help queue for Bak Kwa? 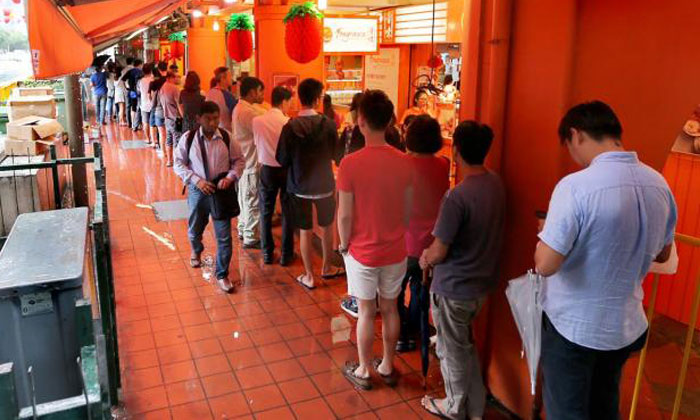 Employers are paying their migrant workers $5 an hour to queue to buy bak kwa, and this could breach the terms of their work permits.

On Tuesday morning, workers were seen queueing outside Lim Chee Guan in Chinatown.

The outlet is known for its long queues during the Chinese New Year season.

An unnamed migrant worker said his boss told him and another worker to skip their usual duties and be in line at the store at 8am.

He told Shin Min Daily News that each of them received a $10 meal allowance.

Migrant worker rights groups view the practice negatively. Migrant Workers' Centre chairman Yeo Guat Kwang said: "We have not heard specific complaints, but we do not think this is an advisable practice."

He said that while employers can ask workers for favours, they may need to consider two factors if the task takes many hours to complete.

First, deployment for an activity other than that stated in the work permit is not allowed, he said.

And as the tasks are not officially permitted, "does it mean the worker is precluded from employment protections while waiting in the queue if any unfortunate accident happens?" he asked.

"Our caution to employers should therefore be to strictly deploy workers only in the jobs stated in their work permits. To do otherwise might, technically, be interpreted to be wrongful deployment," he said.

A Ministry of Manpower spokesman said: "Foreign workers are generally allowed to perform only jobs stated in their work pass applications. Employers are advised not to ask their foreign workers to run non-work-related errands such as queueing to buy bak kwa."

Related Stories
Queue for CNY bak kwa starts early for this chap... at 12.20am
Thinking of buying back bak kwa to S'pore? You might be breaking the law
Chinese woman devours two durians on the spot after being stopped from taking the fruits on the train
CNY
Chinese New Year
foreign workers
long queue
queue
waits for Bak kwa in the middle of the night
illegal