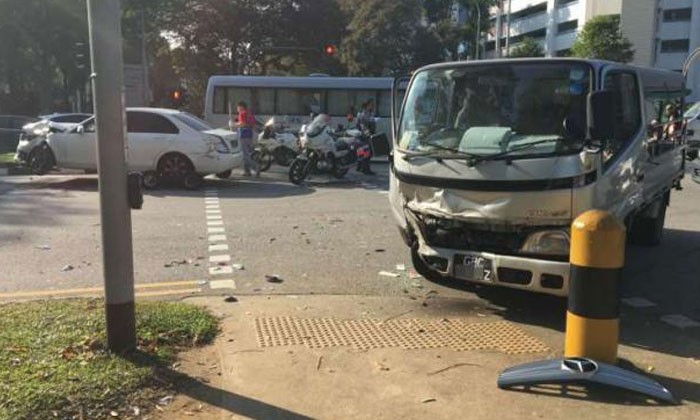 Eleven people were taken to hospital on Saturday (Jan 14) morning after a Mercedes collided with a lorry carrying foreign workers in Yishun.

The police told The Straits Times that they were alerted at 7.51am to an accident involving a lorry and a car at the junction of Yishun Avenues 6 and 7.

The Singapore Civil Defence Force told ST that the 11 people taken to hospital were a female car driver and male lorry driver, and nine foreign workers.

All of them sustained minor injuries.

The foreign workers were from a lift maintenance company and were on their way to work in Yishun from a dormitory in Woodlands, Shin Min Daily News said in a report on Saturday.

A 24-year-old foreign worker, who did not give his name, told Shin Min that his left hand was injured in the crash.

"The driver's left hand was grazed and bled. Everything happened very quickly. We were very lucky - if it was a heavy vehicle, I can't imagine what would have happened," he said.

An eyewitness who gave his name as Mr Li, 28, said: "I heard a bang, and the foreign workers were shocked. They got off the lorry and said their heads, chests and hands hurt."