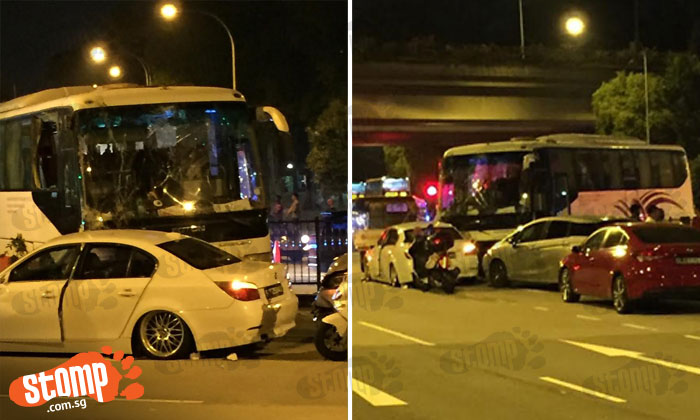 A woman in her 40s died and a man in his 60s was injured after an accident that happened this evening (Jan 12) along Pioneer Road North at around 6pm.

Stomper Karl who was outside Nanyang Technological University at around 8pm came across the aftermath of the accident and alerted Stomp to what happened.

Photos the Stomper sent show a white bus that had apparantly crashed through a fence in the middle of the road. The windscreen of the bus was broken.

A white BMW can be seen a few centimetres in front of the bus. It appeared to be tilted slightly to its left.

Karl said that the bumper of the car was damaged and that there was debris on the road.

A fallen tree can be seen at the rear of the bus.

"SCDF received a call about a road traffic accident at Pioneer North Road at 6.03pm.

"A female Chinese in her 40s was declared dead on site by a paramedic.

"One male Malay in his 60s was conveyed to Ng Teng Fong General Hospital."