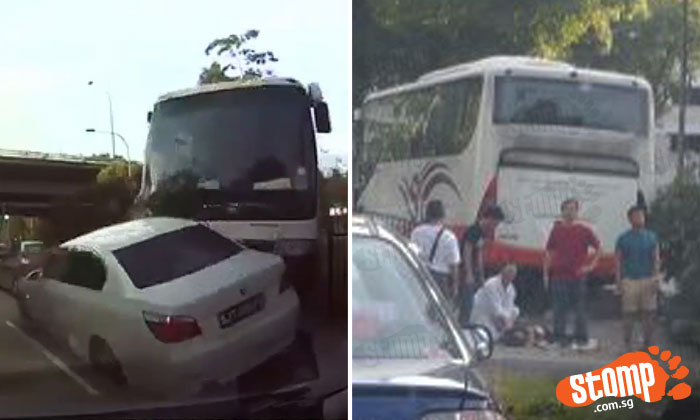 Two videos have emerged on social media showing what happened during the accident along Pioneer North Road at around 6pm yesterday (Jan 12) that left one woman dead.

Stomper Karl who was outside Nanyang Technological University at around 8pm came across the aftermath of the accident and alerted Stomp to what happened.

He told Stomp that a private bus and a white BMW were involved in the accident.

In a video posted on The Straits Times, the bus can be seen making a left turn at high speed.

A female cyclist in her 40s was crossing the road at that point of time and could not avoid the oncoming bus.

She was hit by the bus and later pronounced dead by paramedics.

The woman and her bicycle appeared to be dragged by the bus for several metres. The bus subsequently crashed through a road divider as the cyclist lay motionless on the road.

A second video posted on Beh Chia Lor shows the bus crashing through a tree and the divider before hitting the driver's side of a white BMW.

The impact caused the car to tilt to its left side.

Stomper Karl reported seeing debris around the BMW when he was at the scene of the accident yesterday.

"SCDF received a call about a road traffic accident at Pioneer North Road at 6.03pm.

"A female Chinese in her 40s was declared dead on site by a paramedic.

"One male Malay in his 60s was conveyed to Ng Teng Fong General Hospital."

The bus driver has arrested for causing death by a negligent act.