Youths from different religions come together to promote love above all 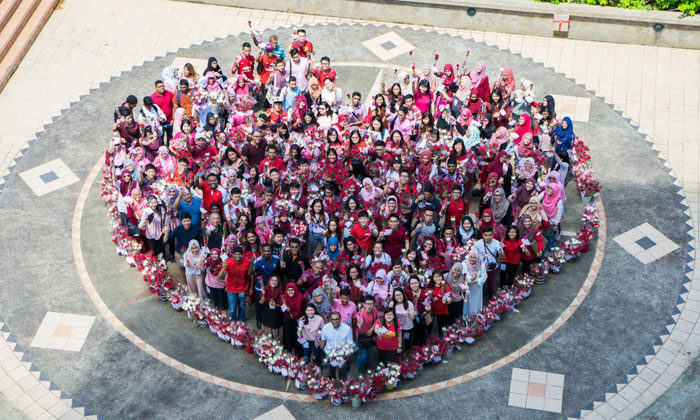 Singapore prides itself in being a melting pot of different cultures and religions and has been a rare example of a multi-racial, multi-lingual and multi-religious society where people live harmoniously together.

However, despite the high level of tolerance and acceptance here, there is still much to learn about each other's cultures.

This is where initiatives like Roses of Peace step in to show how our differences bring us more together than they set us apart.

The inter-faith initiative's purpose is to promote the universal values of peace, love, and kindness to all through the kind act of giving roses and greeting cards bearing the teachings of faith-based luminaries espousing the spirit of humanity and harmony.

Stomp spoke to Mohamed Irshad Abbas, the founder and president of Roses of Peace to find out more.

Irshad had started Roses of Peace as a student society in 2012 when he was studying business management at Singapore Management University (SMU).

Having already set up two other societies, he was approached by a senior one day who was deeply affected French publication Charlie Hebdo published a cartoon of Prophet Muhammad, whose depiction is forbidden in some interpretations of Islam.

She wanted to hold a silent protest and approached Irshad for an endorsement by a society.

However, Irshad wanted to approach the matter differently.

"I asked myself, how to channel the frustration and anger to something more positive?" he said.

He then gathered a group of Muslim peers and brainstormed on how to engage others and reflect on the 'why'.

He then came across a video on YouTube of youths from Denmark giving out roses and was inspired to do something similar here.

With a small core team of just five people including students from both SMU and the National University of Singapore (NUS), Irshad and his friends gathered about 100 volunteers to give out 3,000 roses around Singapore on Nov 10, 2012.

They made sure that all major religious groups were represented with quotes from Prophet Muhammad, Jesus Christ, Buddha and more in greeting cards attached to the roses.

"All religions advocate peace," said Irshad who wanted to spread this idea to as many people as possible.

The initiative was a hit and the support grew with each year.

When Irshad returned to Singapore in 2016 after working overseas, he worked to establish the movement as a non-profit organisation.

They have partnered with several different organisations including Jamiyah, OnePeople.sg and Taoist Federation Singapore.

"We had an inter-faith forum last year, the first time we had a dynamic academic discourse and community sharing across religions," said Irshad.

This year, they had a ministerial forum with Minister for Home Affairs and Law, K. Shanmugam with 180 attendees to facilitate a frank discussion between the minister and youths.

Irshad added that President Halimah Yacob has also come on board as a patron.

Speaking on what is next for Roses of Peace, Irshad said that they are now working towards their ambassador programme which will launch in Jan, 2018.

"It is a training programme where there will be courses on youth leadership, PR media engagement and digital media," he said.

Training will be once a month and every month, two speakers will be invited to speak at sharing sessions.

On what he hopes for Singaporeans, Irshad said:

"We shouldn't take for granted living in religious harmony and relative peace.

"We should all be more involved in the process so more youth can come forward and be engaged in the conversation."

Check out Roses of Peace's Facebook for more information on their upcoming events.

DARE TO CARE AND MAKE A DIFFERENCE

Imagine you and I actively helping those in need and supporting one another. Imagine a place where everyone is empowered to make a difference, creating a home that embraces and care for all. This is the spirit of SG Cares. Together, let’s show the world that we are a nation with a big heart. Join us in our nationwide caring movement at www.sg/singaporecares or “like” our Facebook @singaporecares.

Related Stories
How Project CARE seeks to create a nation of independent elderly through empowerment
Woman makes 'angel gowns' for babies who do not make it home from the hospital
These volunteers make the biggest impact through the smallest actions
More About:
SGCares
inspiring
harmony