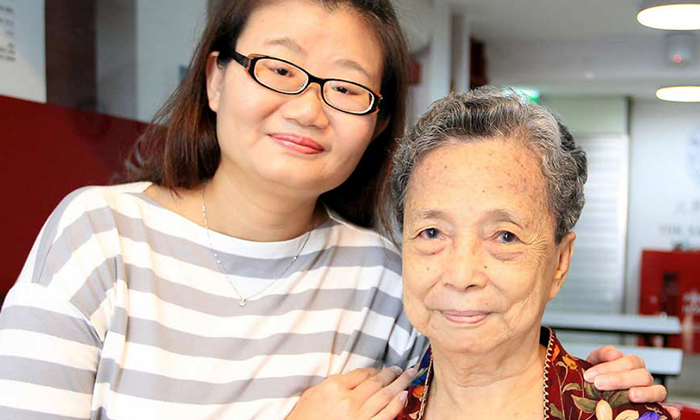 Is age really just a number? And what exactly is graceful ageing?

In Phyllis’s words, Project CARE, a voluntary organisation for volunteers, hopes to reach out to the vulnerable senior who are predominantly isolated --either physically, emotionally, socially or financially-- in order to empower them and spread the importance of ageing well.

To age well, she said, one should embrace learning, actively giving back to the society, and participate in volunteer work.

The group began in 2007, with a small handful of like-minded friends and family members who went around neighbourhood estates, giving out goodie bags containing daily necessities to elderly folks.

For Phyllis, a social worker who works with children with disabilities, youths and families, she feels that the elderly are sometimes, a neglected segment of society, left behind by its rapid progression.

“You need to understand that the psyche of these elderly.

“They used to be fiercely independent individuals who work to support themselves but now many of them may be unable to work.

"Their family members are out working to support them.

“They don’t know who to turn to, and cannot reach out for help.

“Sometimes they become despondent because they don’t know if they have anything to look forward to.”

An important aspect of Project CARE is the home visits, where volunteers can befriend the elderly, distribute daily necessities and provide basic services.

Occasionally, the volunteers would also bring along craft materials to engage their hosts.

These visits usually take place on the weekends, all year round, and the number of home visited in each of these estates varies.

For each home, volunteers visit at least six times, before inviting the elderly host to a final session, usually an excursion.

The importance of these visits, Phyllis said, cannot be overstated.

“We try to break their daily routine, away from watching the television.

“At their age, many of their friends have already passed away, and without jobs or a stable income, going outside the house can be viewed as a waste of money.

“Also it may be difficult for them to travel.

“Their bodies may not listen to them anymore and their senses are not as sharp.

“The volunteers frequently need to help these elderly check the expiry dates of canned food.

“Once, an uncle was eating some packeted food that had gone bad, and I had to tell him, but he told me that he’s been eating food like this his whole life.”

The excursions, Phyllis emphasises, serve a greater purpose, allowing the elderly to bond, and establish their own social circles.

“Many of them don’t even want to go out anymore.

“Ultimately, its important that we change this mindset.

"We cannot allow them to wall themselves in."

Phyllis recounted fondly about Project CARE’smost recent excursion, where they brought a group of elderly folks to the National Gallery Singapore on Aug 26.

Many of the seniors were amazed by how much the place has changed from back when they last saw it, reminiscing about the good old days.

Phyllis also discussed the challenges that come working with the elderly, saying:

“When working with the elderly, it’s important to see the story behind the story.

“For example sometimes people get frustrated when they see rice and rubbish all dumped all over public spaces.

“It could just be a senior citizen suffering from dementia.

"We need to be more understanding."

As one can imagine, the labour intensive nature of these visits means that Project Care is always in need of more volunteers.

When asked about the qualities of a good volunteer, Phyllis replied:

“Anyone with a beating heart for seniors who are willing to work, and able to stomach difficult or unhygienic scenarios are welcome to join."

Patience is also a big bonus.

Phyllis also reiterated that not all of the home visits go successfully, as some senior citizens are not as receptive to others.

"Sometimes they'll invite us in, but other times, they just talk to us from the metal gates.

"You cannot blame them because some of them are just trying to protect themselves since there are so many scams that target the elderly nowadays."

Ultimately, Phyllis dreams of bringing a group of seniors back to their hometowns overseas.

Many of these elderly are migrants who had come to Singapore to earn a living, and they deserve to go back and see their hometown after their years of service, argued Phyllis.

For now, though, she has her undivided attention on growing Project Care:

"I hope Project CARE will continue to grow, and make Singapore a kinder society."

If you feel like making a difference to the lives of the elderly, you can also check out upcoming events for Project Care here.

DARE TO CARE AND MAKE A DIFFERENCE

Imagine you and I actively helping those in need and supporting one another. Imagine a place where everyone is empowered to make a difference, creating a home that embraces and care for all. This is the spirit of SG Cares. Together, let’s show the world that we are a nation with a big heart. Join us in our nationwide caring movement at www.sg/singaporecares or “like” our Facebook @singaporecares.

Related Stories
Woman makes 'angel gowns' for babies who do not make it home from the hospital
These volunteers make the biggest impact through the smallest actions
Anglers with hearts of gold donate 332kg worth of fish to charity
More About:
SGCares
volunteering
inspiring
heartwarming