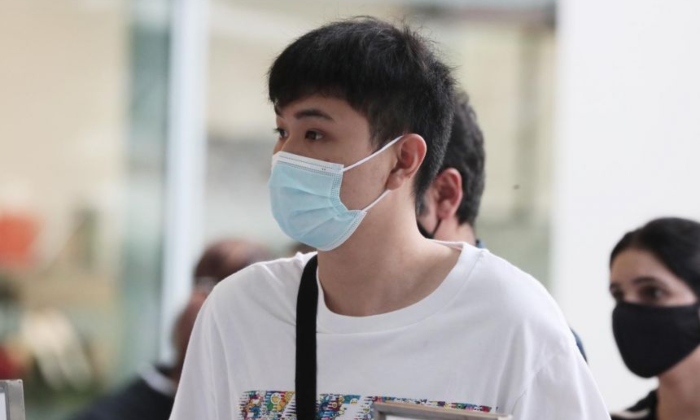 A full-time national serviceman (NSF) who duped the Ministry of Social and Family Development (MSF) into disbursing $2,500 from the Temporary Relief Fund (TRF) meant to help Singaporeans and Permanent Residents tide over the Covid-19 pandemic was sentenced on Tuesday (Jan 19) to 18 months’ probation.

The court heard that Yee Jia Hao, 20, had submitted eight bogus applications using his mobile number for the TRF, a one-off interim assistance scheme to help those who had lost their jobs or a substantial portion of their income due to Covid-19.

The fund is administered by MSF and the People's Association.

Of the eight applications, five were approved and $2,500 in total was paid out to Yee’s bank account. He used his ill-gotten gains to gamble and has not made any restitution.

As part of his probation, the Singaporean has to remain indoors from 10pm to 6am every day and perform 60 hours of community service.

He must also attend a gambling-relapse prevention programme. His parents and brother were bonded for $5,000 to ensure his good behaviour.

Yee had pleaded guilty last year to three counts of cheating involving $1,500 in total. He also admitted to one count of attempted cheating.

During sentencing other charges, including those linked to the remaining TRF sum, were taken into consideration.

The TRF, a financial support scheme the Government announced in March last year as part of the Resilience Budget, opened for application from April 1 to 30, 2020.

The court heard that Yee first accessed the online TRF portal using his own SingPass credentials on April 17 last year where he made a false declaration, claiming that he had lost at least 30 per cent of his personal income owing to the outbreak.

Among other things, an applicant for relief must have a household income of up to $10,000 or earn up to $3,100 a month before losing his or her job.

The applicant must also be retrenched or suffer at least 30 per cent loss of personal income due to the pandemic after Jan 23 last year.

Deputy Public Prosecutor Jeremy Bin said that Yee was aware that he did not meet the eligibility criteria and had not lost his personal income due to the pandemic.

The prosecutor said: "Rather, his personal income had increased, as he had been unemployed prior to Covid-19, and was a full-time NSF thereafter.

"Furthermore, the accused declared that his income prior to Covid-19 was $960, and his income after it was affected by Covid-19 was $672, exactly 30 per cent less. These numbers were fictitious."

MSF disbursed $500 to Yee three days after he submitted his application.

He then continued cheating the ministry of more money but used SingPass credentials belonging to other people, including his father.

The DPP said Yee had deliberately sought to exploit the Covid-19 pandemic and the Government's response to it for financial gain.

He added: "The TRF is not 'free money' to be taken at one's whim and fancy. It was a specific scheme to help those truly in need to tide over the short-term financial impact of losing income or jobs."

Yee was caught after an MSF officer lodged a police report on May 27 last year.

For each count of cheating, Yee could have been jailed for up to 10 years and fined.

Related Stories
Teacher misappropriated more than $40k of students' money for own use
Man orders over $700 worth of food without paying -- by sending them to neighbours' houses
3 arrested for misappropriating $40k of company's money and calling police to report it missing
More About:
court
cheating