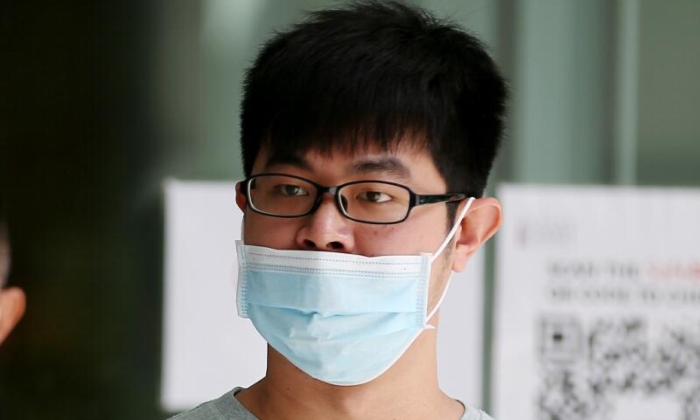 He also promised the riders that he would pay them after the delivery but never did so.

Leonard Tan Tong Han was sentenced to seven days' jail on Thursday (Sept 17) after pleading guilty to four charges of cheating. Each charge was for a separate incident involving a different delivery rider.

Court documents state that Tan ordered more than $700 worth of food using multiple accounts on the mobile apps of food delivery operators GrabFood and Foodpanda. He had used fictitious names and random phone numbers to set up the accounts.

Between Feb 25 and March 14, he ordered food to be delivered to either of two neighbours' flats. He also opted to pay for the orders in cash upon delivery of the food.

Each time before the food arrived, Tan instructed the delivery rider to leave the meal outside the unit.

He also said he would pay the delivery rider for the food through electronic payment apps PayLah! or PayNow.

After the delivery rider followed his instructions and left, Tan then picked up the food but did not make payment.

Court documents state that on two occasions, the delivery rider returned to the unit the food was delivered to, after failing to receive payment from Tan.

Both times, the neighbour at the flat informed the rider that he had not ordered any food. The rider then made a police report.

One of the neighbours also made a police report after one instance on Feb 25, saying that his address could have been misused.

It is not stated how Tan was eventually caught.

Court documents state that GrabFood and Foodpanda lost $718.54 in total due to Tan's offences.

Tan has since made full restitution to both firms. He will begin serving his sentence on Oct 1.

For each offence of cheating, Tan could have been jailed for up to three years and/or fined.

Related Stories
Two 16-year-old teens arrested for cheating victims of more than $5k on Carousell
Man arrested for allegedly cheating Lazada of more than $86k
Man who posted about how it was "so simple to cheat" Temporary Relief Fund being investigated
More About:
cheating
delivery
jail
Courts & Crime