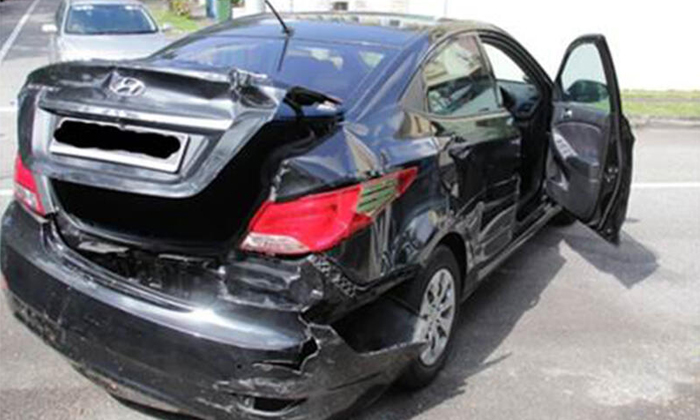 A recalcitrant young offender, who was given two years’ probation in May 2021 for offences such as cheating, returned to a life of crime just five months later, stealing a car with a friend and injuring three police officers who ambushed him.

He and his friend, Lakshan Saravanan, wanted to sell the stolen car to get some cash.

Police ambushed the young man in a carpark. Despite not having a driver’s licence, he sped away in the car and injured three officers, who fell in the operation.

The man, who is now 20 and cannot be named as he was below 18 years old when he started his crime spree, was charged in court in November 2021 over the car theft.

On Monday, while he was out on bail, he stole items such as beauty products worth nearly $2,000 at the Sephora branch in Ion Orchard shopping mall.

On Wednesday, he pleaded guilty to six charges, including motor vehicle theft, driving without a valid licence and voluntarily causing hurt to a public servant.

Six other charges, including two more counts of voluntarily causing hurt to a public servant, will be considered during sentencing.

The court called for a report to assess his suitability for reformative training, in which offenders are detained in a centre to follow a strict regimen that can include foot drills and counselling.

In May, Lakshan, then 20, was ordered to undergo reformative training for at least a year.

Over dinner on Oct 29, 2021, the two offenders hatched a plan to steal a car. Deputy Public Prosecutor (DPP) Andrew Chia said the plan involved getting a ride through TeleHitch – a group chat on messaging platform Telegram where drivers can accept requests from passengers to ferry them for a price.

On Oct 30, 2021, at about 8pm, they boarded a driver’s car at a carpark in Sengkang and tricked him into leaving the vehicle with the engine running, said the DPP.

When the driver left to buy cigarettes on Lakshan’s behalf, the two drove off in the vehicle, with Lakshan at the wheel.

The victim made a police report at about 8.30pm.

Meanwhile, the two offenders met a 16-year-old female friend and used a phone to post advertisements on Telegram, stating that they had a car for sale.

Lakshan dropped off his accomplice at around 10.40pm. In an attempt to avoid detection, Lakshan then drove the stolen car to a carpark in Marine Parade Drive and swopped its licence plates with those belonging to another car.

On Oct 31, 2021, their female friend received a message on Telegram from someone who expressed interest in buying the car.

Court documents did not disclose the identity of this person. Lakshan, the girl and the potential buyer agreed to meet at a carpark in Yishun Street 21. Lakshan drove the stolen car there at around 2am.

A group of police officers ambushed Lakshan at the carpark, but he managed to get away and passed the stolen car to his accomplice. Lakshan was later arrested.

Under the instructions of the police, Lakshan sent a text message to the young offender at around 9am on Oct 31, 2021, asking to meet him in a carpark in Ang Mo Kio Avenue 4.

The young offender drove the stolen car to the carpark, and three officers tried to nab him in an ambush.

The DPP said: “The accused panicked and quickly stepped on the accelerator to drive off, knowing that it was likely to cause hurt to the officers.”

All three officers fell and were injured. One of them had abrasions on his limbs. Court documents did not disclose the injuries that his two colleagues had.

He stopped the stolen car at a dead end in Lentor Plain. When the police car stopped behind him, he tried to drive away and hit the police vehicle, injuring two officers.

Police eventually arrested him. His case has been adjourned to next Wednesday.