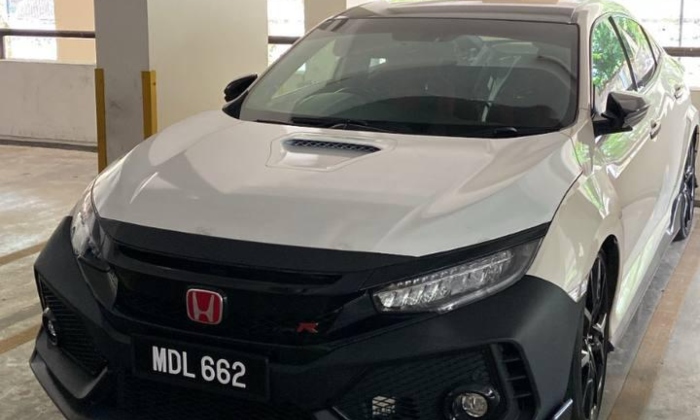 A Honda Civic Type R stolen from a Singaporean man while he was vacationing in Genting Highlands last weekend has been recovered some 300km away in Selangor – much to the owner’s relief.

The car was stolen from the parking compound of SkyAvenue mall on July 16, prompting Mr Damien Yeo, 28, to lodge police reports in Malaysia and in Singapore.

Yesterday (July 19), it was found in a condominium car park in Sepang, Selangor.

Mr Yeo told TNP that four men had been arrested today (July 20) in connection with the theft.

The car was first noticed entering the condominium by a security guard at about 6am on July 16 – the same day the car was stolen.

According to Malaysian news site Sinchew, the numerous racing stickers plastered all over the car’s surface roused the guard’s suspicion, and he contacted the police after realising the vehicle resembled the stolen one.

When police arrived at the condo car park, they confirmed that the car belonged to Mr Yeo.

Found without its 18-inch rims, sound system and car cameras, the three-year-old car also had its Singapore-registered plate replaced with a Malaysia-registered one.

Mr Yeo said the full extent of damages has yet to be determined, and that it will be assessed properly when brought back to Singapore. He plans on restoring the car to its original state as soon as possible.

Speaking to Mothership.sg, Mr Yeo said he will return to Malaysia with his parents on Monday (July 25) to retrieve the car.

"I would like to convey my thanks to the Malaysian police and the officers in charge for returning my beloved car to me," he said.