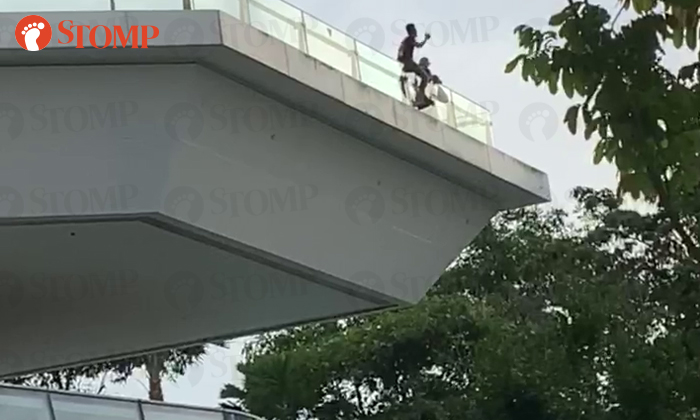 A youth sparked concern after being seen sitting on the glass ledge of The Star Performing Arts Centre while talking to a girl last Thursday evening (Dec 19).

Stomper Tech Guy, who works in the vicinity, witnessed the incident at around 6.15pm and contributed a video to Stomp.

He told Stomp: "I saw this young guy sitting precariously on the edge of the building parapet. And the thing he was sitting on is made of glass.

"There was a girl beside him whom he was talking to. He kinda looked like he was showing off to her, trying to look brave and cool.

"A lot of people kept looking at them.

"What the guy was doing looked very dangerous as he was at great height. I was worried about his safety."

The Stomper said that he did not inform anyone about the incident as he had to return to work.

In the video taken by Tech Guy, the youth can be seen swinging his arm about while he sat on the glass ledge with his legs hanging over it.

Responding to a Stomp query, a spokesman for The Star Performing Arts Centre said it had verified the incident and established that it occurred on the third floor of the centre.

The spokesman said: "The area is on the third floor of The Star Performing Arts Centre and is an area accessible to the public when there are no events on that level.

"The glass ledge is certainly not designed for sitting.

"We have signages in place to inform the public not to sit on the balustrades.

"We also have security onsite that patrols the area at regular intervals. If the security spots such a scenario, our standard operating procedure is for the security to approach and ask the member of the public not to do so as it is not meant for sitting and perching and a dangerous act."

The spokesman also told Stomp that it appreciated the public taking notice of the incident and would remind its security to look out for such dangerous behaviour.