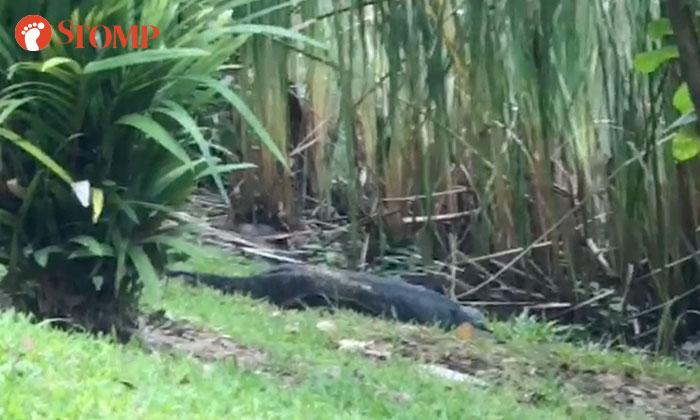 Stomper Naveen came across a monitor lizard along a canal between Waterway Point shopping mall and Tebing Lane at 5.58pm on Wednesday (July 18).

Naveen who stays on Punggol Road told Stomp in a phone interview that he had gone on his routine evening jogs when he first notice something large on the banks.

“At first I thought it was a Komodo dragon. I later searched online and realised that the Komodo dragons are only found on the Indonesian islands.

"What I saw was a monitor lizard.

For the next 10 to 15 minutes, Naveen stayed to observe the lizard. Some inquisitive joggers also stopped to join Naveen upon seeing the creature.

Naveen also took a video of the creature and sent it to Stomp.

“I spoke to another man who stopped. He told me that he also jogged near the area quite often and the monitor lizards here are a common sight.

“For me, this was the first time seeing a lizard here.”

According to Naveen, the lizard did not move from its spot, but its tail was moving.

“It could have just eaten something. But It didn’t seem bloated.”