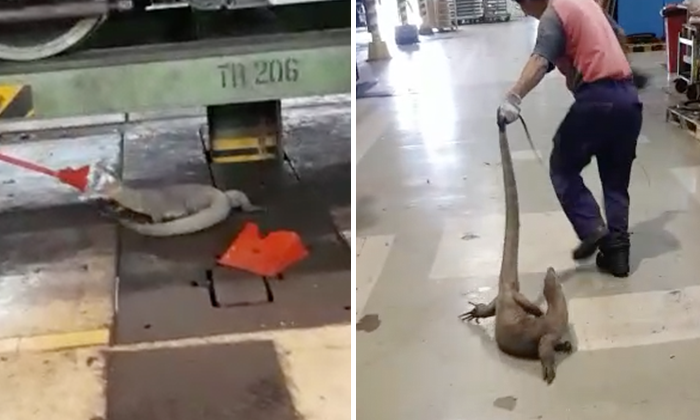 A video of SMRT employees chasing away a monitor lizard hiding in the undercarriage of a train that is not in service at a depot has been circulating online.

SMRT has responded to Stomp's media query on the incident and confirmed that the monitor lizard has been removed from the depot.

Stomper Mr Tan sent us a video of the incident.

The video shows a worker prodding the lizard, which was hidden beneath the carriage, with a shaft.

His colleague was seen shining a torchlight at the creature as the worker was trying to get it out of the undercarriage.

They were joined by another colleague who attempted to get the lizard out by thrusting at it with the handle of a dustpan.

The creature, clearly agitated. crawls away slowly, and is followed by the two employees, one of whom held the dustpan.

The employees continue shadowing the lizard, occasionally hitting it with the dustpan.

At some point, the dustpan breaks apart, and the lizard turns, lashing at the dustpan handle.

Another employee then swoops in and grabs the lizard by its tail, attempting to drag it off.

However, the lizard whips its tail around and he was forced to let go.

More people joined in to distract the lizard, as the man snuck up from behind and grabbed hold of its tail once more.

This time, he successfully drags the lizard away from the train, leading it outside.

In response to a Stomp query, Vice President for Corporate Communications, SMRT, Mr Patrick Nathan said: "A monitor lizard was found in one of our depots yesterday and was removed."