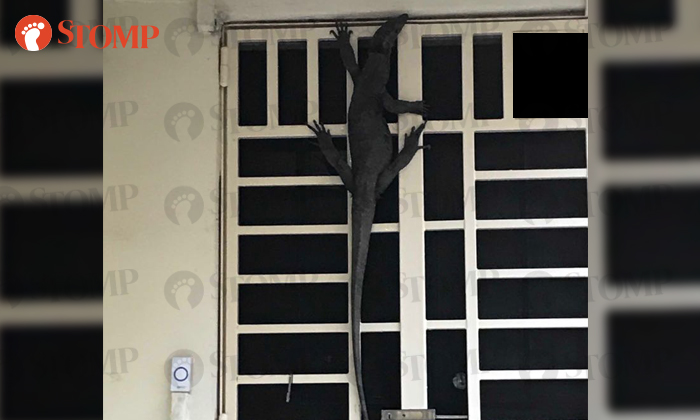 A huge monitor lizard, measuring around one metre in length, was found perched on the door of a resident at Bock 122, Yuan Ching Road in Jurong West yesterday evening (Feb 19).

Police and officers from the Animal Concerns Research and Education Society (ACRES) responded to the incident.

Although the reptile tried to escape and had entered a minimart, it was eventually rescued by Acres staff, who then safely released it back into the wild.

Stomper John said the incident occurred at his friend's house, located on the first floor of the block, and added: "My friend sent me photos and videos, and told me to Stomp it."

He told Stomp: "The funny part is the monitor lizard had actually pressed the doorbell while climbing up the metal grilles of the gate.

"'It was around 6.30pm to 7pm so my friend's mum, who was about to go out, wondered who would be coming to visit at this time. She looked out through the peephole and saw no one except a branch-like thing.

"When she opened the door, she was shocked to see a big monitor lizard hanging outside.

"So she called the police, who came and cordoned off the area while we waited for the wildlife rescue team to arrive."

A video taken at the scene shows two Acres employees trying to rescue the monitor lizard from the resident's door, only for it to run away.

According to John, the animal fled to a minimart nearby.

"It was later successfully caught," added John, who contributed a second video showing the monitor lizard being placed into a white container.

In response to a Stomp query, Mr Kalai Vanan, Acres' deputy chief executive officer, said the rescue team received a call about the stranded reptile at around 7.40pm.

He told Stomp: "When we reached the site, we noticed that the lizard was clinging onto the house gate.

"Monitor lizards are good climbers and the water monitor lizard probably did this as it was most likely stressed."

A large crowd that had gathered at the scene is likely to have contributed to the creature's stress as well.

According to Mr Kalai, the water monitor lizard, known to be a shy animal "that will usually try to run away" is believed to have gotten lost after wandering off from the adjacent Japanese Garden park.

He added: "The monitor lizard was eventually rescued and safely released back into the wild."

Members of the public are urged not to crowd around wild animals and to give them space.

Should you encounter a wild animal in distress, you can contact Acres at 97837782.