World's only brown panda, abandoned by its mother, gets ready for mating 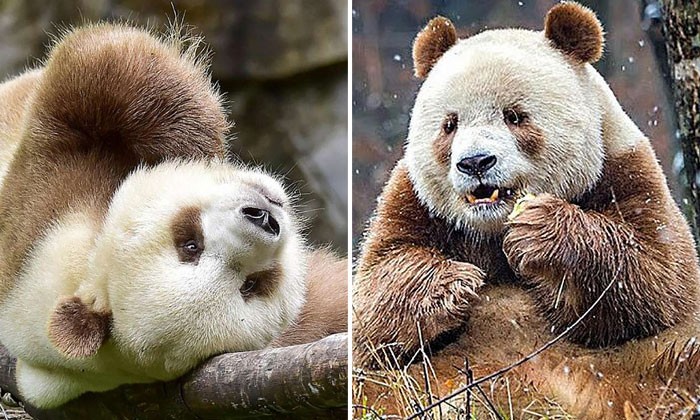 Qizai is the world's only living panda with a coat of brown and white, instead of the usual black and white.

But the seven-year-old male panda from China may not be alone for much longer, as keepers are preparing it for mating.

Qizai was found as a two-month-old cub in the Qinling mountains of central China. It is thought to have been abandoned by its mother.

Researchers took it to a wildlife reserve where it was kept alive with milk harvested from other pandas.

Its keeper He Qin told The Daily Mail that when Qizai was a cub, it was rejected by the other pandas in the reserve, who would steal its food.

Qizai subsists on a diet of about 20kg of bamboo a day and has since grown to a healthy weight of more than 100kg.

The Qinling panda is a subspecies of the giant panda, and the world's first brown panda sighting was reported in the Qinling mountains in 1985.

Fewer than 10 have been spotted since. Qizai is thought to be the only one now alive.

"He is slower than the other pandas, but he is also cuter," Mr He said.

The hope is that Qizai's offspring can shed some light on the genetic mystery of its fur colour.

According to Xinhua, Qizai was left to fend for itself last winter amid temperatures as low as minus 30 deg C, as keepers prepared it for release into the wild.