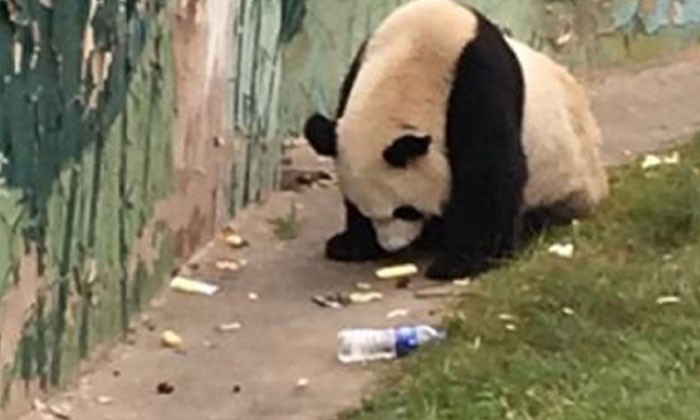 A panda named Shunshun was seen scavenging through litter that was thrown by visitors of a zoo in China.

According to Shanghaiist, the photos went viral on Chinese social media platform, Weibo, causing netizens to worry that the "world's saddest panda" might get sick from eating 'junk food'.

A few of them blamed zookeepers for not cleaning up the empty bottles, rotten fruit, plastic bags and deflated balloons that were found in the panda's home.

Others blame the visitors, mainly tourists, for throwing the rubbish found.

One Weibo user wrote, "The disgraceful tourists and the negligent staff are both just trash."

The Taiyuan zoo has apologized and cleaned up the panda's enclosure on Oct 9.

They have placed Shunshun under medical observation but nothing unusual has been discovered.

Despite the zoo taking accountability for what has happened, they have also defended themselves by asserting that they received 34,000 visitors during the day it happened.

The staff members have tried to stop tourists from feeding the animals but there are just too many people littering.

Related Stories
Who's the sicko who used scotch tape on bird in Potong Pasir?
Cruel owner leaves dog in parked car at Vivocity carpark with no ventilation for over an hour
'I made a mistake', says man in Loyang Green dog abuse video
More About:
animals
dirty
China
zoo
panda eating rubbish
panda