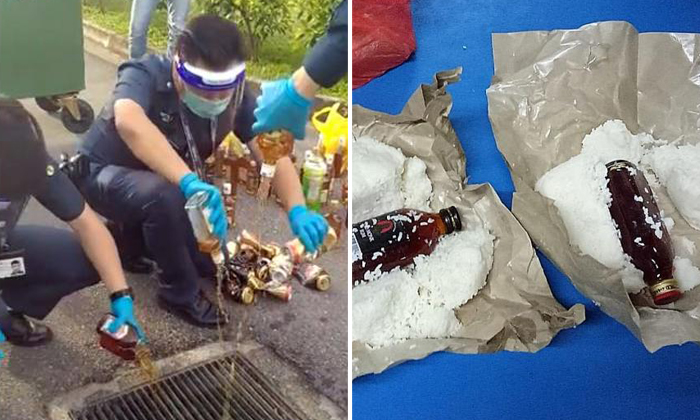 Cut off from the outside world as Covid-19 swept through the dormitories, migrant workers desperate for a smoke or a drink turned to unorthodox means to get their fix.

At one dorm, cigarettes and liquor were tossed over the fence. And in at least two purpose-built dorms, smuggling networks involving garbage collectors, cleaners and drivers were able to take root.

Speaking on condition of anonymity, some workers told Tamil Murasu and The New Paper how alcohol and cigarettes were smuggled in and sold at marked-up prices, with some items costing four times more than the prices outside.

At Sungei Tengah Lodge, they implicated those who have access in and out of the dorm. A resident, who wanted to be known only as Deva, 30, said alcohol has not been allowed in the dorm since April.

He said garbage collectors brought in contraband in their trucks and passed them to cleaners who in turn gave them to a group of selected workers. Residents go to these selected workers to collect their orders.

Deva said in Tamil: "You can get anything here. In my block, there is a room with a man who gets items from the cleaners.

"Those who buy alcohol will have to provide an empty plastic bottle for him to fill with alcohol to avoid suspicion from the management staff."

Another resident in his 40s, who wanted to be known as Gopal, said he has not bought any contraband item, but the prices were "common knowledge".

Outside, a pack of cigarettes typically costs $10 to $15 while illegal chewing tobacco sells for $2.50 to $5 a packet.

After some measures were eased at the dorms, allowing some workers to go out for work, some allegedly tried to smuggle in alcohol by hiding the bottles in food packets, but they were caught.

At the S11 Dormitory in Punggol, food delivery drivers allegedly took in alcohol and legal cigarettes.

A worker who did not want to be named said the operations were co-ordinated by a group of about eight residents, with the items hidden in food packets. 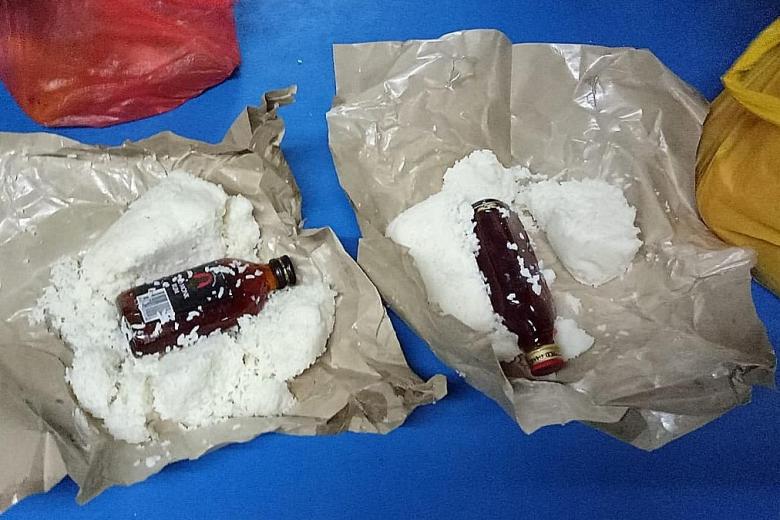 The activities are said to have ended in May after the culprits were caught.

At Westlite Toh Guan, the smuggling was more ad hoc.

A resident who wanted to be known as Muthu said workers arranged with those living outside to buy the items and toss them over the fence at secluded areas around the dorm.

He said: "They take the price of whatever I buy as commission. So if I buy $10 worth of items, I have to pay $10 commission. This is for their expenses and risk."

A Ministry of Manpower (MOM) spokesman confirmed that the ministry and the police are aware of cases where unauthorised alcohol and cigarettes were smuggled into dormitories over the past few months.

"These activities were put to a stop promptly and stern actions have been taken against the residents involved, including imposition of administrative penalties by the dormitory operators," she said.

Before Covid-19, residents were banned from drinking alcohol in their rooms, but they could smoke and buy and drink alcohol in designated areas.

During the pandemic, the sale and consumption of alcohol was suspended to avoid potential law-and-order issues, but MOM may consider relaxing the restrictions as the situation stabilises, the spokesman said.

She added: "In the meantime, the authorities will continue to monitor the situation closely and work with the dormitory operators to implement measures to prevent recurrence, including stepping up checks of persons and vehicles entering the dormitories."

A spokesman for Centurion Group that runs Westlite Toh Guan and four other dorms said incidents of cigarettes and alcohol being thrown over the fences occurred mainly during the circuit breaker period.

Nine cases were detected since May and the items were in small quantities, he said, adding that there is no evidence to suggest they were intended for wider distribution.

These activities contravened dormitory rules but had not broken Singapore laws, he added.

"We work closely with Singapore Customs and the police, and in the past nine years operating dormitories in Singapore, have not experienced smuggling or sales of illegal products within our dormitories."

S11 Capital Investments, which runs S11 Dormitory, and TG25, which operates Sungei Tengah Lodge, did not respond to queries by press time.