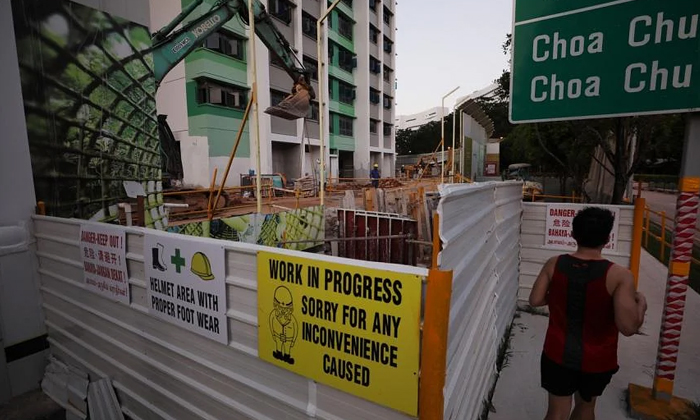 A construction worker died in a forklift accident on Thursday (July 7) at a Build-To-Order (BTO) project site in Choa Chu Kang, taking the total number of workplace deaths here this year to 29.

It is the third fatal workplace accident to occur at a BTO project site since the start of the year, the fourth involving a forklift, and takes place as workplace safety issues have come under close scrutiny in recent months.

The worker, a 35-year-old Indian national, was standing on the rear counterweight of a forklift at the worksite while tying an electrical cable onto the side of an overhead beam when the forklift moved backwards suddenly.

This occurred at about 10am, and the worker, employed by Mega Engineering (Singapore), was caught between the forklift's canopy and the beam.

The Singapore Civil Defence Force said it received a call for assistance at about 10.15am. The worker was unconscious when he was taken to Ng Teng Fong General Hospital, where he was later pronounced dead.

A 24-year-old man was subsequently arrested for a negligent act causing death, police said. The Straits Times understands that the man is a colleague of the dead worker.

Teambuild Engineering and Construction, the main contractor and occupier of the worksite, has been ordered to stop all work there.

"As a general safety measure, forklifts should only be used for (their) intended purposes," MOM said, adding that investigations are ongoing.

Keat Hong Verge is a Housing Board (HDB) development comprising three blocks of two-room flexi, three-room and four-room flats. It is expected to be completed this quarter, and be ready for owners to move in by the first quarter of next year.

According to its website, Teambuild is also the main contractor for at least four other BTO projects, including Northshore Edge in Punggol, Yishun Glen, and the recently launched Grove Spring @ Yishun.

In response to queries, the firm said only that the authorities are still investigating Thursday's accident. HDB said it will work with Teambuild to assist with the probe.

"Safety is of utmost importance to HDB," said an HDB spokesman. "We also extend our heartfelt condolences to the deceased's family and, together with the contractor, we will render support and assistance to them."

The other fatal accidents at BTO sites this year occurred on Feb 23 and March 12.

In the first incident, which occurred at the site of the upcoming Tampines GreenCrest BTO project in Tampines Street 64, a 49-year-old Chinese national died after the forklift he was driving toppled sideways and he was thrown out of the vehicle.

The worker was not wearing a seat belt at the time.

In the second incident, which took place at the Hougang Olive BTO project site in Hougang Avenue 3, a 43-year-old worker, also from China, died after he was struck by a falling steel plate while in an excavated trench.

These deaths, as well as the 10 fatalities recorded in a single month in April, prompted repeated exhortations from the authorities for companies and workers here to take safety seriously amid a manpower crunch and a rush to complete projects.

Earlier this week, in response to parliamentary questions filed by three MPs, Manpower Minister Tan See Leng said enforcement action was taken over more than 9,000 safety breaches between January and June, double that in the same period last year. This came on the back of more inspections being conducted in higher-risk sectors, such as construction and marine.

Stiffer penalties were also introduced on June 14 for companies with poor safety performance and more will be done to tackle the issue upstream, Dr Tan said, including a review of the current workplace safety and health personnel requirements at worksites, and the demerit point system for safety breaches.

Dr Tan ruled out inexperience as a likely factor behind the recent spate of deaths, instead citing preventable safety lapses as the cause.

Falls from height and vehicular incidents alone accounted for about half of the fatalities this year, he added.