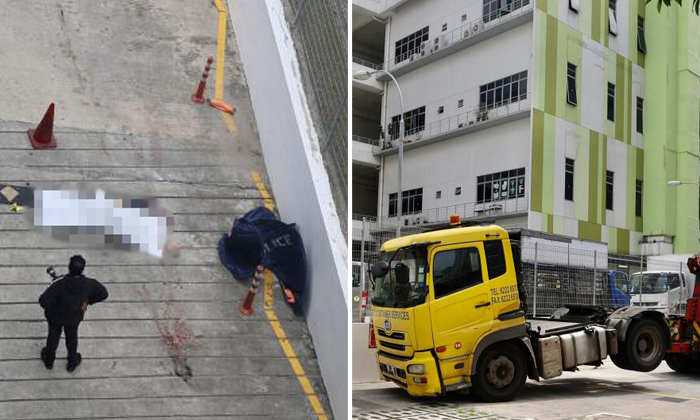 A 39-year-old foreign worker died on Wednesday morning (April 27) after he was run over by a prime mover in Yishun Industrial Street 1.

Responding to queries from The Straits Times, a Ministry of Manpower (MOM) spokesman said the worker, an Indian national, had parked the vehicle on a ramp along a driveway before alighting from it.

"A short while later, the prime mover started to roll forward and the worker ran towards the front of the vehicle. Unfortunately, he was run over by it," said the MOM spokesman.

The police said they were alerted to the fatal accident at around 8am.

"(The worker) was found motionless and pronounced dead at the scene by a Singapore Civil Defence Force paramedic," they said.

The ministry said: "As a general safety measure, heavy vehicles should be parked on firm and level ground, with parking brakes fully engaged and wheel chokes properly positioned."

MOM said that Ocean IFM, a property management company, occupies the premises where the accident happened.

A manager of City Container (S) said the worker was picking up cargo when the accident happened, Shin Min Daily News reported.

He added that the company will contact and provide assistance to the worker’s family in India.

The top causes of workplace fatalities last year were vehicular-related accidents, in which 11 workers died; falls from height, which killed eight workers; and fires and explosions, which caused five deaths.

MOM said in March that it intends to introduce heftier fines against offenders and companies that fail to ensure machinery is used safely, particularly in the manufacturing industry, in order to stem workplace fatalities and injuries.

The ministry will also increase surveillance at workplaces with noise hazards and exposure to hazardous chemicals, and expand safety training for new workers.