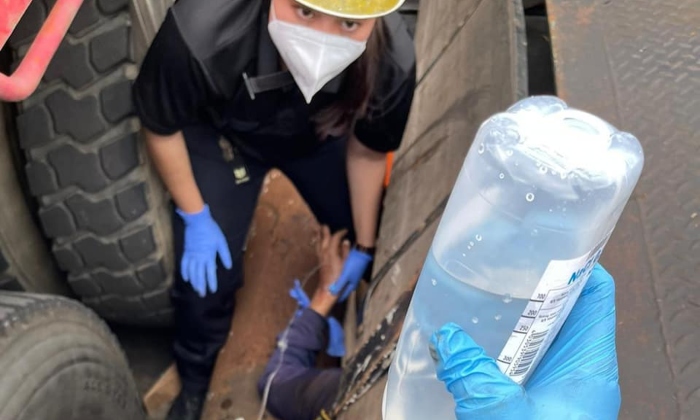 A 49-year-old worker died after being trapped under a large metal cylindrical pipe between a trailer and a lorry on Friday (May 27).

He was freed by the Singapore Civil Defence Force (SCDF) and taken to Tan Tock Seng Hospital, where he died the same day, said the Ministry of Manpower (MOM).

His death brings the total number of workplace fatalities this year to 25, the highest number in the same period since 2016.

This comes on the back of a manpower shortage and the rush to complete projects, which continue to push up the number of fatalities that had been falling before the Covid-19 pandemic.

MOM said the man, who was working at 18 Defu Avenue 2, was employed by Good Year Contractor, and that the building is occupied by Lik Kng Contractor.

It is investigating the accident and has instructed Good Year Contractor to stop all its lifting operations.

The ministry said a lorry crane toppled on its side while it was lifting and unloading large metal cylindrical pipes known as propeller shafts.

This caused one of the shafts which was on the lorry crane to roll off. It struck the worker who was coordinating the lifting operation, and pinned his leg to the ground.

SCDF was activated at 1.05pm on Friday.

Firefighters and paramedics from Paya Lebar Fire Station conducted an assessment on the trapped man and rendered medical assistance to stabilise him. 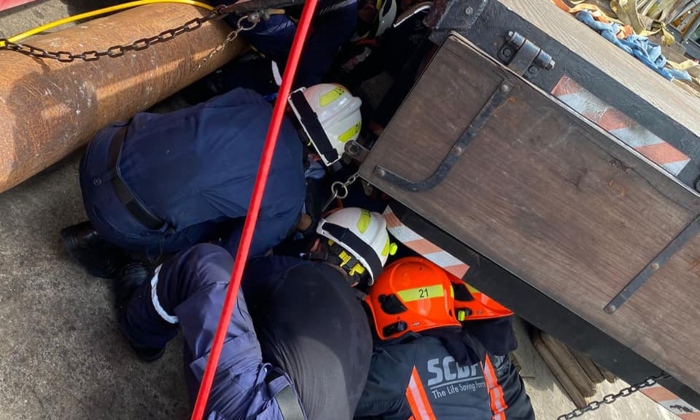 Rescuers from the elite Disaster Assistance and Rescue Team used two air lifting bags to lift the pipe and free the victim, before he was taken to hospital.

MOM said it was alerted to the fatal workplace accident at 1.55pm that day.

Observers, including Prime Minister Lee Hsien Loong, have come forward to say that the recent spate of workplace fatalities is unacceptable. Firms have been urged to take a safety timeout, which would put a stop to all work, for them to review risk assessments and familiarise workers with safety procedures.

More than 12,000 companies had called a timeout by mid-May, after 10 workers died last month alone.

The industry has set a goal of reducing workplace fatalities to a rate below one per 100,000 workers by 2028.

Related Stories
Worker dies after getting run over by prime mover that he parked on Yishun ramp
2 workers die at Keppel shipyard after structure collapses, throwing them off scaffolding atop vessel
Driver dies after getting thrown out of forklift that toppled at Tampines BTO worksite
More About:
workplace accident
death
fatal accident
scdf