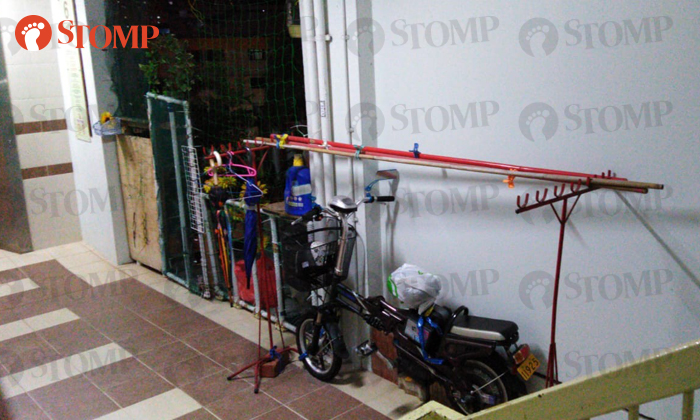 Residents are assisting to remove clutter along the corridors and at the staircase landing of Block 151 Woodlands Street 13, the Town Council told Stomp in response to queries.

Stomper Frustrated Resident had raised safety and aesthetic concerns over the clutter in an earlier report on Feb 8.

Photos he took show how there were numerous items such as potted plants, furniture, laundry, bicycles and even a makeshift gate on various levels of the block.

In a statement to Stomp, Marsiling-Yew Tee Town Council apologised for the reported situation of the corridors and staircase landing.

A spokesman added: "Residents have been very co-operative with Town Council in assisting to remove the areas of clutter when we shared with them the safety concerns of over cluttering.

"Marsiling-Yew Tee Town Council will continue working with our residents to keep the estate well maintained and clutter free."

Stomper Frustrated Resident confirmed with Stomp on Thursday (Feb 14) that the Town Council has been in touch about the matter.

He said: "They requested for more time as it's still the Chinese New Year period and they want to use the soft approach; after which they will send out letters if things don't improve and escalate to the relevant authorities if required."