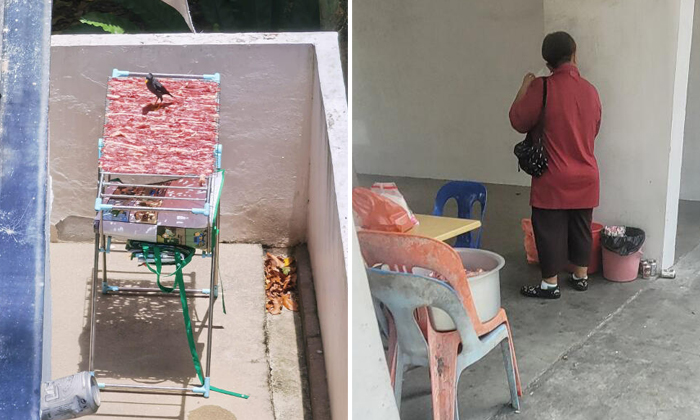 Strips of raw meat laid out on towel racks along a residential corridor, attracting flies and even birds.

To one resident of an HDB flat at Block 6 Beach Road, it's a common sight, thanks to her neighbour who airs the meat outside every three to five days.

When Shin Min Daily News visited the scene on Monday (Sept 5), the reporter saw three people processing minced meat outside their unit. One of them was busy marinating the meat, while another was working in a kitchen.

As the reporter approached the kitchen, the woman quickly dumped the contents from a pot into a bin.

A third woman then said she was preparing the dried meat for a friend’s personal consumption.

A 63-year-old cleaning supervisor who lives on the third storey said he often sees strips of meat laid out on racks propped against the wall.

“There are many air-conditioning compressors installed through the various units; you can imagine the dirt and dust that will drop on the meat," he said.

“I'm not averse to drying meat, (but) the whole process is not very hygienic. It is definitely not something that you should sell.”

This is not the first time such an issue has surfaced in the same area.

TNP reported in December 2018 that racks of raw meat were left to dry in the heat of dusty air-conditioner vents along the common corridor on the second storey of Block 1.

At the first storey of Block 6, trays of meat propped up by overturned plastic stools were also left outside to dry in the sun.

These racks of meat were allegedly meant for making meat jerky for sale - both from the home and from a store at the nearby Golden Mile Complex.

Following the report four years ago, it seemed the practice stopped after the National Environment Agency’s investigations.

But it seems you can't keep a good jerky down.