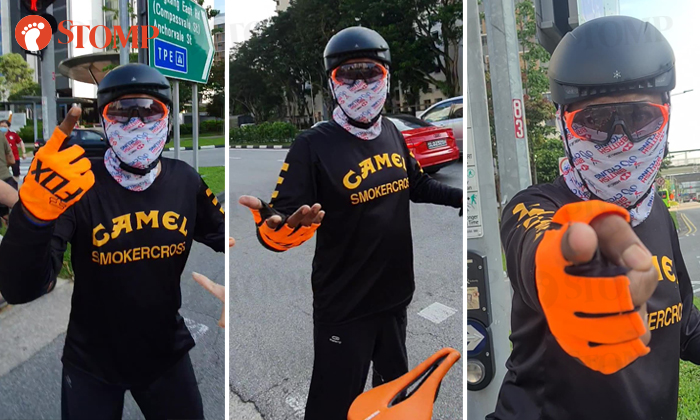 A 57-year-old cyclist is assisting with police investigations after he allegedly assaulted a woman who did not give way to him on a footpath in Sengkang.

Stomper H said the incident occurred while she was walking along a foothpath with her husband on Saturday (Mar 26), at around 9am.

She recounted: "I was walking with my husband along the footpath adjacent to Sengkang East Way (beside Sengkang Hospital), towards Sengkang East Road.

"As I am hearing-impaired, I did not realise that a cyclist from behind was ringing his bell non-stop until my husband gestured at me to move to the left.

"A female cyclist then rode past me on the right, followed by a male cyclist in a bright orange Trek Marlin mountain bike.

"We continued walking in the same direction and soon caught up with him at the same junction. We stood a distance away behind him while waiting for the traffic light as he continued to stare aggressively at us. However, he then shouted, 'Don’t know how to give way is it?' at us.

"We told him that we had already given way once we realised that someone was ringing a bell at us from behind. I also explained to him that I have a hearing impairment and therefore did not hear his bell ringing until my husband told me about it.

"However, the man continued his verbal abuse so I took out my mobile phone to record him.

"Suddenly, he raised his hand and slapped me on my cheek, which became red." 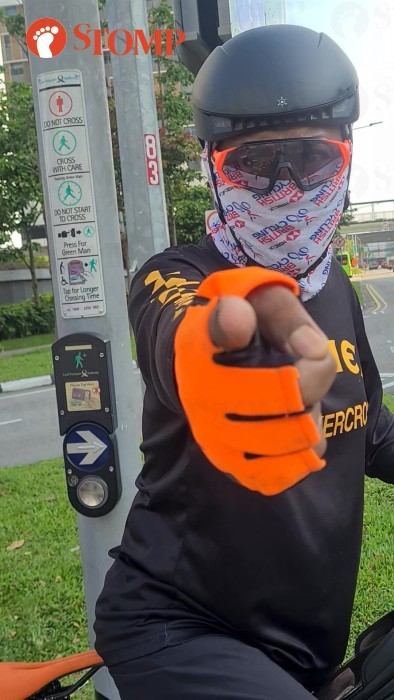 According to H, there were multiple passers-by who witnessed the incident.

The Stomper added: "I asked him why he hit a woman in broad daylight and told him not to leave as I'd be calling the police. He then tried to escape by cycling across the junction even though the lights were not in his favour.

"Thankfully, a middle-aged Indian couple with a young daughter and a young Malay man who had seen what happened tried to prevent him from leaving, while my husband also stood in front of his bicycle just in case, even though my husband was nursing an injury.

"However, the cyclist suddenly rode his bicycle straight into my husband before trying again to escape. The Indian couple held him back while we tried calling the police." 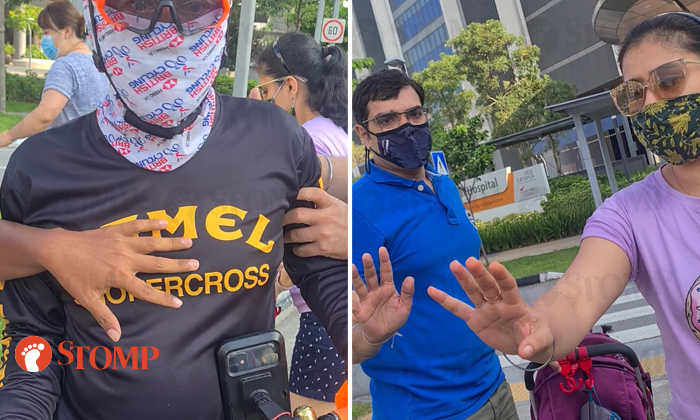 H shared pictures showing the cyclist being held back by members of the public and added: "The cyclist then sneered at us, saying that 'call police also no use as the police can’t do anything to him'.

"When the lights turned in his favour, the man broke free and sped off across the junction before turning left in the direction towards Punggol, so my husband and I gave chase.

"We also tried enlisting the help of bystanders to stop him. A Chinese man who was jogging tried to chase him down, but we lost sight of them around Block 261.

"We lodged a police report immediately in person at Sengkang Neighbourhood Police Centre (NPC), though the police were not able to track him down."

H is appealing for witnesses or those who know the cyclist to come forward and contact Sengkang NPC at 1800-343-8999.

She shared photos of the cyclist with Stomp and described him as "a Malay man in his late 30s/early 40s, around 170cm+ tall with a tanned complexion".

H said: "He was wearing a black long-sleeved Camel Smokercross cycling jersey, orange sports sunglasses and a white British Cycling balaclava. He is likely a resident of Sengkang/Punggol."

The Stomper also posted her appeal in a Facebook group on Monday (Mar 28), with the post garnering over 2,800 shares to date,

In response to a Stomp query, the police said they received a call for assistance along Sengkang East Road at around 9am.

"A 57-year-old man is assisting with police investigations," they told Stomp.