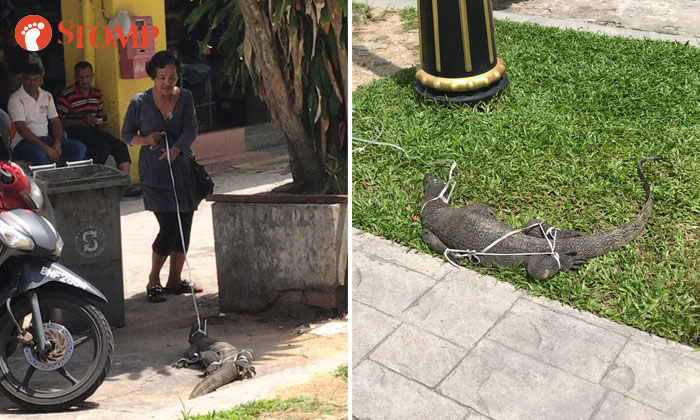 Stomper Shelby was outside Komtar JBCC, a shopping mall in Johor Bahru, Malaysia, when she saw a woman dragging a monitor lizard by a string on Monday afternoon (June 24).

She was shocked and told Stomp that the monitor lizard looked visibly stressed and afraid.

"I asked her what she was doing and she claimed that she found the lizard at a longkang nearby," said the Stomper.

"She said she was worried it would bite so she tied it up with raffia string.

"She later tied it to a lamp post and kept asking passers-by if they wanted it before dragging it and tying it to a tree."

Shelby said she called the Pahang Wildlife and National Parks Department (Perhilitan) at 2pm to report the incident.

"At 3pm, the authorities came to remove the lizard and later informed me they had released it elsewhere."

The water monitor lizard or Varanus Salvator is a protected species under Malaysia's Protection of Wildlife Act and only Perhilitan has the authority to capture it.

However, Shelby was disturbed when she reflected on the woman's actions.

"I finally understand why the lady kept asking people if they wanted the lizard," she said.

"It was very disturbing that no one seemed to care about what the lady was doing."

The New Straits Times reported last year that a chain of food stalls in Pudu, Petaling Jaya and Klang was serving claypot curry with a wide selection of meat choices including monitor lizard.

According to the eatery, the meat is "tender and full of flavour".