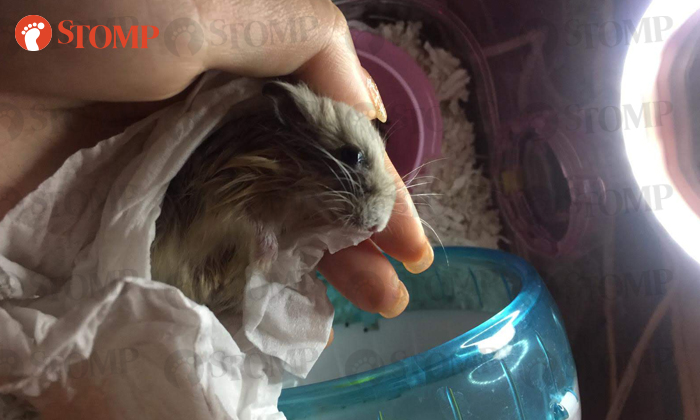 Investigations into a case of pet abandonment involving over 20 hamsters and fancy rats in Sengkang are ongoing, the Animal and Veterinary Service (AVS) said in response to Stomp queries.

It was earlier reported by Stomp that at least 25 pet rodents were found abandoned at Block 257A Compassvale Road on May 1.

Stomper Anonymous said the hamsters were found with injuries and in a malnourished state after having been abandoned since April 27. At least four died.

The AVS, a cluster of the National Parks Board, said on Tuesday (May 7) that it has been alerted to the incident and is concerned to learn of the animals' abandonment.

Ms Jessica Kwok, group director of AVS, told Stomp in a statement: "We have contacted relevant parties and are working with the Hamster Society on this matter. However, as investigations are ongoing, it is inappropriate for us to comment on the case at this point.

"The support of the community is integral to safeguarding animal health and animal welfare. All owners of animals have a duty of care to the animals in their charge and they can refer to the Code of Animal Welfare for Pet Owners to learn about their responsibilities, and better understand how to provide a good and comfortable life for their animals.

"Small pet owners can reduce the number of unwanted pets by separating the males from the females and not breeding them, and encouraging other owners to do the same."

Ms Kwok said that the AVS takes a serious view on all feedback received from the public on pet abandonment and will look into the cases reported.

She added: "As with all investigations, all forms of evidence are critical to the process and photographic and/or video-graphic evidence provided by the public will help."

Members of the public can alert AVS of any suspected cases of pet abandonment via its online feedback form or call its hotline at 1800-476-1600. Information shared with AVS will be kept strictly confidential.