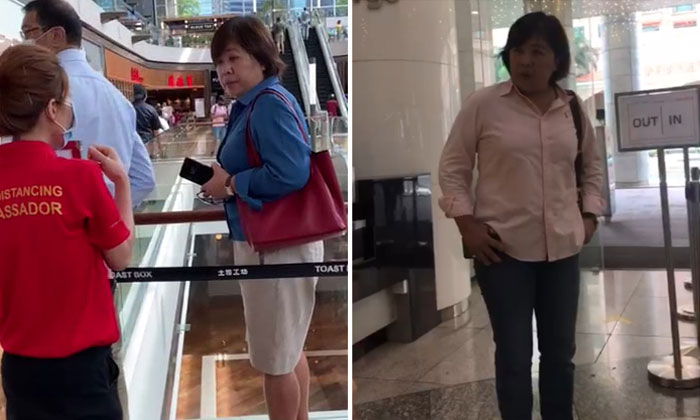 Shaffiq Alkhatib
The Straits Times
May 19, 2021

The woman seen in a viral clip refusing to don a mask while at Marina Bay Sands (MBS) last Saturday (May 15) is already facing a criminal charge over a similar offence allegedly committed in the same month last year.

According to court documents The Straits Times obtained on Wednesday, Phoon Chiu Yoke had allegedly failed to wear a mask over her nose and mouth "at all times" at Newton Hawker Centre between 7.20pm and 8pm on May 8, 2020.

The 53-year-old was charged with an offence under the Covid-19 (Temporary Measures) Act.

She is accused of committing the offence during the circuit breaker period, which was imposed between April 7 and June 1 last year to curb the spread of Covid-19.

Phoon is contesting the charge, and the trial will take place next Monday.

She made the headlines earlier this month after a video showed her arguing with a safe distancing ambassador (SDA) at MBS.

In the clip, an SDA can be seen trying to convince Phoon to put on a mask.

Phoon questions the SDA on whether she has a "badge".

She is heard saying: "If you have no badge, why are you asking me to do something? Who are you representing?"

When the SDA replies that she represents MBS, Phoon says: "That's what you say, I can say that I'm a police (officer)."

At the end of the clip, Phoon can be seen clutching a mask which she slides into her pocket.

In an earlier statement, police said that they received a call about the incident at around 5.15pm on May 15.

There are at least two other videos circulating, showing the woman in public places without a mask on. One of the videos was supposedly taken at VivoCity (left), while the other was at Clarke Quay Central. PHOTOS: SCREENGRABS FROM FACEBOOK

Phoon is believed to be involved in other similar instances where she was seen in various buildings and establishments without a mask on.

There are at least two other videos circulating, showing her in public places without a mask on.

Woman who refused to wear a mask at MBS apparently does not like to follow the law. She's been caught on video not wearing the mask on several occasion. Follow us on Telegram https://t.me/thelocalsociety

Posted by Thelocalsociety on Saturday, May 15, 2021

One of the videos was supposedly taken at VivoCity in February this year, while the other was at Clarke Quay Central in December last year.