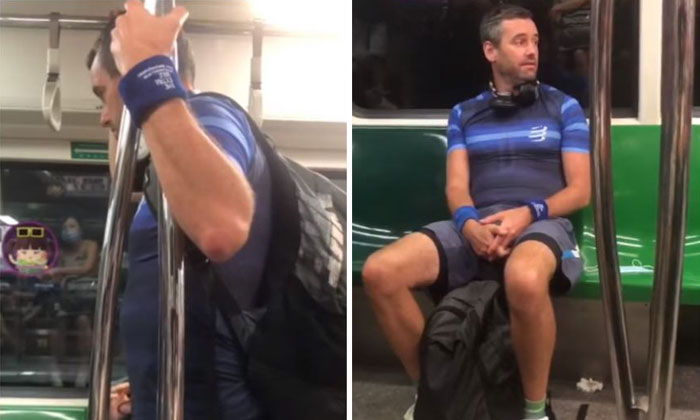 A 39-year-old man who refused to wear a mask while on the MRT train was arrested by the police on Sunday (May 9) for allegedly causing public nuisance and flouting safe distancing measures.

In a video circulating on social media, the man can be seen telling fellow commuters loudly: "I'm very religious... I hate seeing uncles, granddads with the mask on."

When a fellow commuter offers him a mask, the man rejects it. The video also shows a commuter leaving her seat when he takes the one next to her.

Education company director Jerome Tan, 61, who took the video, told The Straits Times that the incident happened on Friday night at around 11pm.

He was on a train heading towards Joo Koon when the man got on.

"He was talking to an old man, trying to convince him to take off his mask, saying it'll make him sick," said Mr Tan.

Another commuter then told off the unmasked man and advised him against bothering others on the train.

The man was still on the train when Mr Tan alighted at Redhill MRT station around 11.20pm. He said he approached the MRT station master and told him about the unmasked commuter.

The station master told him that he would call the next station to inform the staff of the incident.

Mr Tan said the man's refusal to wear a mask was potentially harmful to others, given that it raised the risk of Covid-19 transmission.

"What's worse is that he tried to convince others not to wear masks, and I found his attitude quite arrogant - something had to be done."

The police said investigations are ongoing.

Rail operator SMRT said in a Facebook post on Sunday that it had made a police report about the incident. It added that staff who have been alerted to such incidents would ask commuters to wear a mask properly.

If commuters do not comply, the Public Transport Security Command (TransCom) would be activated, added SMRT.

"We do not condone socially irresponsible behaviour that affects the safety of others, and strongly encourage our commuters to keep their mask on at all times and avoid talking on trains."

The incident on Friday happened the same day a woman was convicted for not wearing a mask and engaging in a heated argument with passers-by at the Shunfu Mart hawker centre, in an incident caught on video.

Paramjeet Kaur, 41, was sentenced to two weeks' jail and a $2,000 fine after pleading guilty to one charge each of failing to wear a mask over her nose and mouth while out of her residence, and for public nuisance.

In the video clip of the incident in May last year, she claimed to be a "sovereign".

Last May, Law and Home Affairs Minister K. Shanmugam said in a Facebook post that he had checked what Kaur might have meant by claiming to be "sovereign".

He said: "There is a movement in the United States, and adherents to that movement, (broadly speaking) reject government, reject the police and any kind of authority."