Woman who refused to wear mask at MBS being investigated: 'If you have no badge, why ask me to do something?' 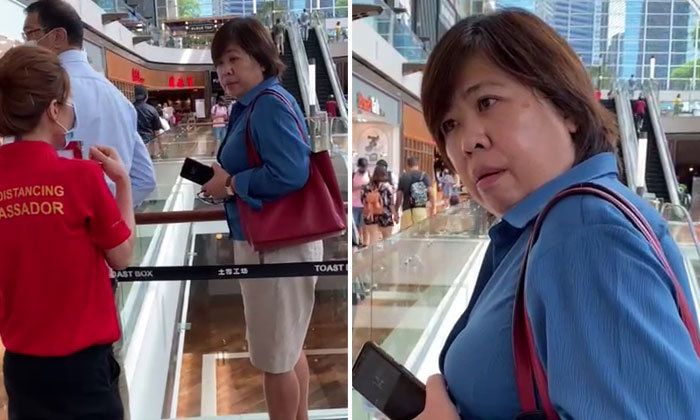 A woman who refused to wear a mask at Marina Bay Sands is being investigated by the police.

In a statement on Saturday evening (May 15), the police said the 53-year-old woman had allegedly not worn a mask despite numerous requests from a safe distancing ambassador (SDA) to do so.

They received a call for assistance at about 5.15pm on Saturday, and are investigating her for public nuisance and breaching safe distancing measures.

In a widely circulated video of the incident, the woman is seen without a mask arguing with a safe distancing ambassador, who is trying to convince her to put a mask on.

The woman questions the safe distancing ambassador on whether she has a badge and who she represents.

She said: "If you have no badge, why are you asking me to do something? Who are you representing?"

When the safe distancing ambassador says she represents MBS, the woman replies: "That's what you say, I can say that I'm a police (officer)."

In the rest of the one-and-a-half-minute video, the safe distancing ambassador repeatedly tries to get the woman to put on a mask to no avail.

The woman also repeatedly questions the safe distancing ambassador about a badge.

At the end of the video, the woman can be seen clutching a mask which she slides into her pocket.

The police said the woman is believed to be involved in other similar instances where she was in various buildings and establishments without a mask on.

There are at least two other videos circulating showing the woman in public places without a mask on.

One of the videos was supposedly taken at VivoCity in February, while the other was at Clarke Quay Central in December last year.

There are at least two other videos circulating showing the woman in public places without a mask on. One of the videos was supposedly taken at VivoCity (left), while the other was at Clarke Quay Central. PHOTOS: SCREENGRABS FROM FACEBOOK

In the latter, she is also seen arguing with staff of the mall, again asking for a "card" from the staff to show that they represent the mall.

Woman who refused to wear a mask at MBS apparently does not like to follow the law. She's been caught on video not wearing the mask on several occasion. Follow us on Telegram https://t.me/thelocalsociety

Posted by Thelocalsociety on Saturday, May 15, 2021

Responding to queries from The Straits Times, a spokesman for MBS said it was aware of the incident and was working with the police in their investigations.

"We would like to take this opportunity to remind all visitors to act responsibly by masking up at all times, especially as we enter a period of heightened alert over Covid-19," she said.

"Our SDAs can be identified through their uniforms, and are tasked to approach visitors to adhere to safe management measures."

Those found not wearing a mask or not wearing one properly outside their place of residence may be charged for offences under the Covid-19 (Temporary Measures) (Control Order) Regulations 2020.

Those found guilty of public nuisance may be jailed for up to three months, or fined up to $2,000, or both.