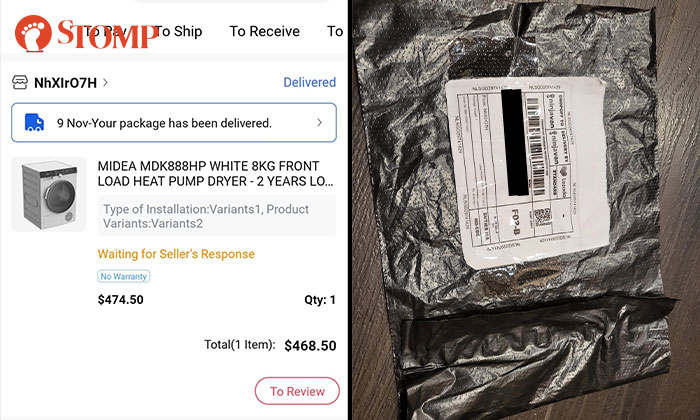 A Lazada spokesman reached out to Stomp and said Lazada has looked into the matter and issued a full refund to the customer.

A woman was furious when she received an empty parcel instead of a dryer she had bought online on Lazada.

The Stomper told Stomp she had ordered the Midea dryer a few days ago after noticing a drop in price during the 11.11 sales. 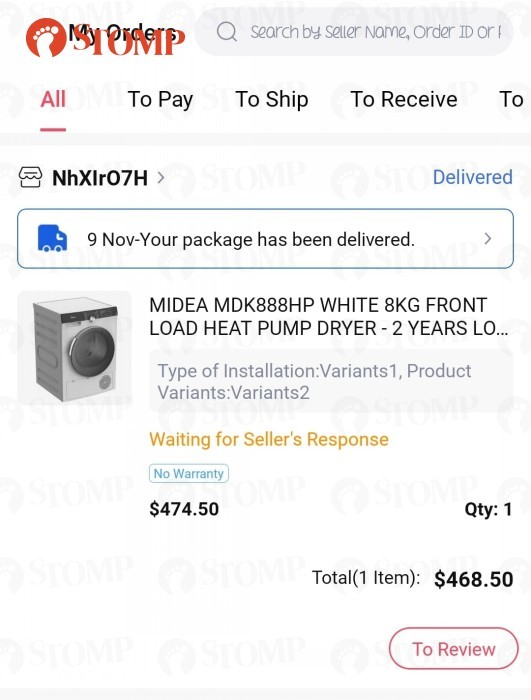 "I ordered a Midea dryer and they sent me this nonsense plastic.

"Until now, I cannot get a refund because Lazada refuses to refund me.

"Every day they are telling me they are checking but refuse to refund."

She added that she called her bank but they could not do anything for her either.

"They said I couldn't claim a dispute because I was the person who made the transaction.

"Wow, what logic is this?

"I didn't even know the shop is running a scam."

The shop can no longer be found on the Lazada website.

She has also reported the matter to the police.

"It's really frustrating when nobody is handling my case."

She told Stomp that she has called Lazada more than 10 times and has contacted them via live chat every day but is disappointed at how they are handling this case.

"It's shocking that after showing Lazada the empty parcel I received, they did nothing!

"I've been a Lazada supporter for many years and even bought their LiveUp membership but this is how they handle this issue.

"They didn't even call me to assure me of anything and left me hanging for days."

She added that she does not believe she is the only one to be affected by this seller's tactics.

"I don't know how many victims are there out there but I believe I'm not the only one," she said.

"It's normal for prices to drop during the 11.11 period so I just bought the dryer because it's on sale.

"How would I know?

"You would never be able to tell which seller is real or fake.

"This seller wasn't just selling one or two items but several products like a normal e-commerce store (except it was a new shop).

"The price was not crazy cheap also!

"I have also previously bought from new sellers before because the prices were attractive but they were legit sellers.

"I just want to warn online shoppers to be careful and its best to buy big ticket items from physical stores.

"As an avid online shopper for more than 10 years, this is really shocking and I'm still traumatised by this scam.

"It's quite embarrassing to be scammed."