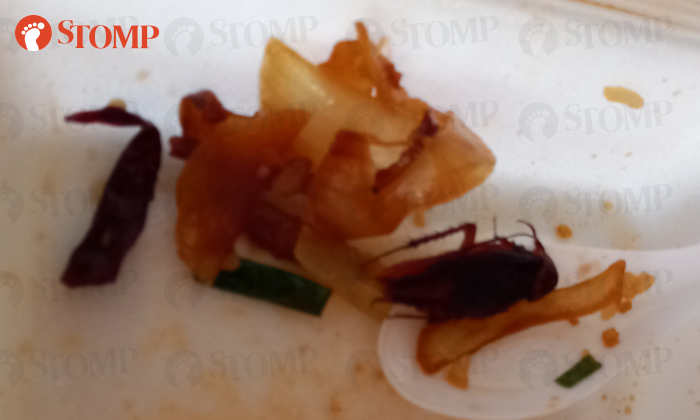 A woman was shocked after finding a cockroach in her fried kway teow from a stall that she frequently patronises in Tampines.

Stomper JR alerted Stomp to her mother's unpleasant experience, which occurred at around 11am on Monday (Feb 7).

JR said: "My mother usually buys from the same mixed rice stall at the Tampines Interchange area (nearer to the Sheng Siong side).

"When she went home and ate her food, she saw a cockroach inside the box. It was shocking as this is the stall she usually patronises with no issues until now.

"The stall has never had such pest incidents before, so my mother's first reaction was shock, and then panic. My mum felt panicked because she did not know how the cockroach entered the food and whether she would get diarrhoea from it."

Asked if they reported the incident to anyone, JR said: "My mum wanted to take a photo and show the stall owner but in the end, she decided not to as she felt it was a hassle.

"Only my family members knew about this as my mum had also bought mixed rice from the same stall for my grandmother and uncle the day before. Luckily, they did not get diarrhoea."

Related Stories
SFA investigating incident of cockroach found in porridge from Tampines stall
Woman grossed out by bug in her economy rice meal from Breadtalk IHQ's Food Republic
Woman bugged to find insect on her plate just as she was about to finish eating at Thai restaurant
More About:
insect
cockroach
disgusting
unhygienic
food