Woman lies down in middle of the road in Yishun, remains silent and unmoving 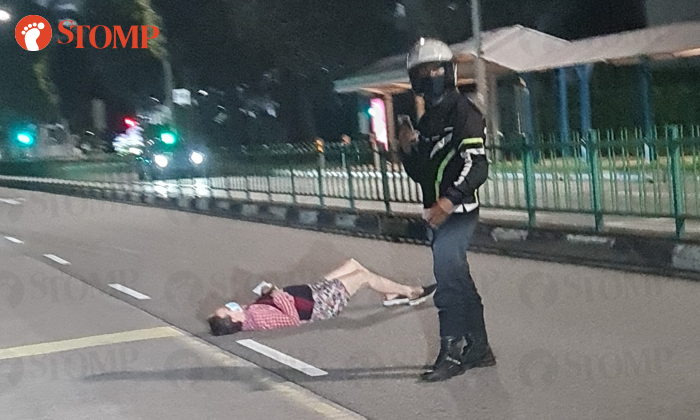 Drivers were going on their way like any other ordinary Monday night when the sight of a woman in the middle of the road stopped them in their tracks.

The woman, who was alone, was seen sitting down on the road along Yishun Avenue 5 before she proceeded to lie down.

YQ said: "She was just sitting there in the middle of the road and daydreaming. After that, she lay down on the road and didn't even talk.

"Someone approached and stood next to her, but she did not make any noise or whatsoever. She just lay down there.

"Some cars stopped while others moved to the other lane.

"I feel that it was quite dangerous for the woman to do that, but maybe she was too stressed. She did not seem drunk."

Related Stories
Drunk woman sprawled on table at Maxwell Food Centre: 'Even her friend was paiseh'
Drunk woman taken to hospital -- but not before she said 'I love you' to paramedics
Man sleeps in van for at least 9 hours after parking by roadside -- despite attempts to wake him
More About:
unusual
unusual sight
sleeping
Yishun