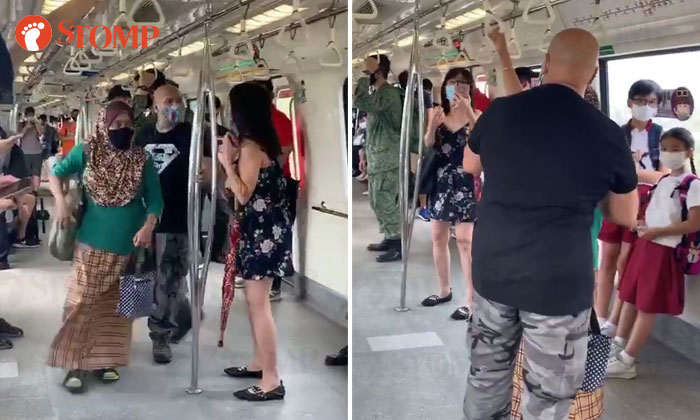 A woman caused a scene in an MRT train after shouting at a fellow commuter for standing too close to her.

A Stomper alerted Stomp to the incident that happened when the train was travelling from Lakeside to Jurong East on Friday (Jan 29) at about 1.30pm.

He shared a video he took of the commotion.

"The lady asked the auntie to move until she shouted like that," the Stomper said.

In the video, the woman is heard scolding the other lady and telling her "there is so much space over there, you want to stand here?"

She repeats herself and takes out her phone to record the woman.

Having had enough, another commuter steps in to stand up for the other woman.

He calls the woman "stupid" and tells her to move if she has a problem with it. He adds: "F*** you, understand?"

The woman responds: "F*** what? She cannot go over there? I was here first, okay?"

She continues spewing vulgarities as the man ushers the other lady to move.

The woman then takes out her phone to record the man and tells him to say what he wants because she is going to post the video.

He also takes out his phone to record her, tells her she is "embarrassing" and calls her out for being a bully before the video ends.