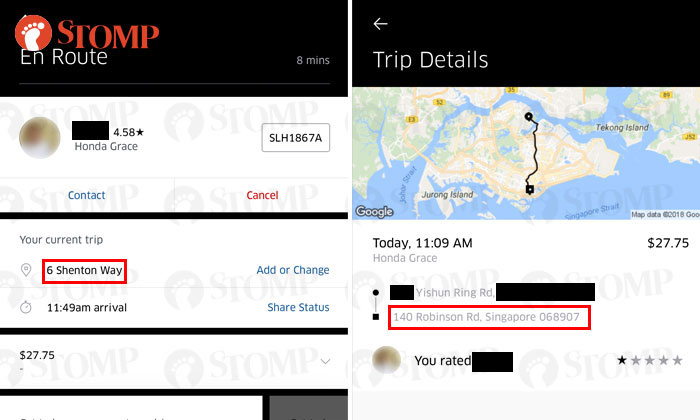 Stomper Nabila was furious when an Uber driver dropped off her helper and two young daughters, aged two and four, at a different location from where she had stated.

She had arranged for a pickup for her helper and daughters to her workplace at 6 Shenton Way on Jan 19.

She added that the location has a standard pick up and drop off point.

However, according to her app, the driver had alighted her helper and children at 140 Robinson Road.

"Can you believe how worried sick I was looking at the app and seeing that they had alighted but were nowhere in sight?" said the Stomper.

"I rushed straight to 140 Robinson Road and still could not find them so I called the Uber hotline and asked him to give me the driver's number so that I can find out where he had dropped off my children and helper.

"He said, 'I'm sorry we are not allowed to do that and there's nothing much we can do'.

"I shouted at him saying that my children are missing and he told me that I should call the police."

She noted that her helper did not have a mobile phone with her.

Thankfully, her husband did a search around the area and found them safe and sound.

Nabila later found out from her helper that the driver had dropped them off behind the OUE Downtown building near the loading and unloading bay.

"She added that he was in a rush and drove straight off after alighting them at such a dangerous place with lorries and there was a construction site nearby.

"What makes me furious is that my maid was handling two young children alone with a stroller.

"Why am I paying for a service at the driver's own convenience?

"I am utterly disappointed in the Uber driver and customer service personnel's service.

"I want a refund. If anything happened to my children yesterday, will they be responsible?"

In response to Stomp's media queries, an Uber spokesman issued the following statement:

"Thank you for reaching out to us on this matter.

"We are pleased to report that this matter has already been resolved to the rider's satisfaction when it was brought to our attention."

Related Stories
Man waits over 2 hours for Deliveroo to send him his Sakae Sushi dinner -- that never came
Grab passenger gets charged cancellation fee after driver increases waiting time from 3 to 20 min
Woman charged $6 cancellation fee after Uber driver rejects her ride and says, "We don't like pool"
More About:
uber
bad service