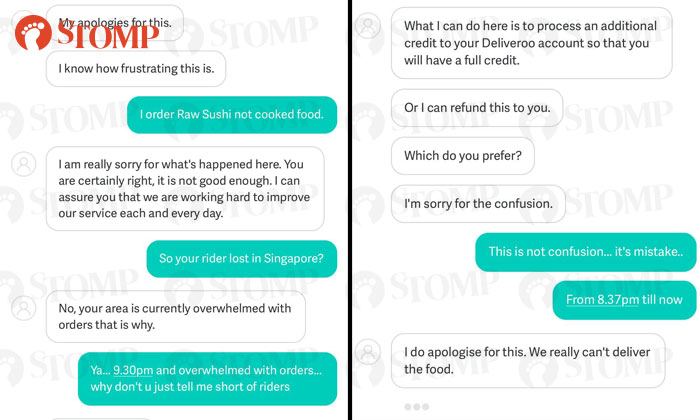 Stomper Ace was frustrated with his recent experience with food delivery service Deliveroo on Saturday (Jan 13).

He had placed an order from Sakae Sushi at 8.37pm and the app indicated that it would take 21 minutes for his food to reach him.

"The Sakae Sushi is located at Woodlands Civic Centre which is just a 10 minutes drive away from my home at Woodlands Street 41," said the Stomper.

His food was supposed to arrive just before 9pm but at 9.11pm, he received a call from the restaurant telling him his food was ready but he had not heard anything from Deliveroo.

He started a live chat with a customer service officer at 9.30pm who told him that no rider was assigned to his order yet.

At around 9.40pm, Ace's app was indicating that his delivery status was still at "preparing your food".

At 9.47pm, he texted the chat again because he realised that the restaurant was probably closing.

She told him that once a rider is assigned to him that his order would arrive in "10 to 15 minutes".

She added that the reason why it was taking so long was because Ace's area was "overwhelmed with orders".

The customer service officer then told him that Sakae Sushi had been informed to "wait until a rider comes".

By 10pm, he was informed that they were still trying to find him a rider.

"At 10.16pm, I received a call from an Australian number," said Ace. "A man with an Australian accent told me that my Deliveroo order was on its way."

His app then showed that his order had been delivered but there was still no rider or food in sight.

The customer service officer in the chat confirmed that a rider was then on his way to collect Ace's order.

He then received another call, from a Singapore number this time, asking him if he had cancelled his order.

"I said no, and told her just minutes ago, her colleague informed me that my order was on its way," said the Stomper.

He sent another message to the live chat at 10.54pm and was told that the restaurant could not process his order.

"I do apologise for this," wrote the officer. "We really can't deliver the food."

Ace told Stomp in a phone interview that throughout the process he was given $5 credit followed by $20 credit and an offer to top up the remaining $0.88 since he was charged $25.88 for his order that never came.

"I was surprised and worried because I was hungry," said Ace.

"I ordered sashimi and sushi, not cooked food so I was worried that even if it had arrived at 11pm, two hours after the food was prepared, I would be going to the toilet.

"In the end, my food didn't come at all.

"What kind of service is this?"