Woman asks strangers for money to buy ticket at KL train station, gets called out by FB user for being a cheat 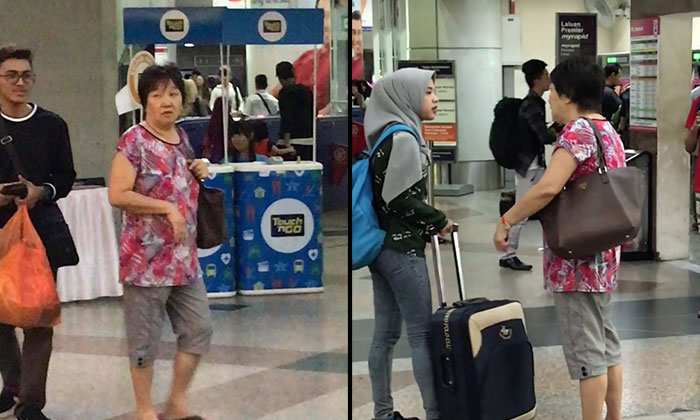 Sometimes it doesn’t pay to be kind.

A Facebook user, Lee Shi Wei, recently shared on her personal page about a con woman in pink who frequents Kuala Lumpur Sentral railway station, asking passengers for money to buy a ticket.

Shi Wei, who apparently works at the station, has noticed the same woman asking for money from passers-by almost every day in a period of 10 days.

Worried that commuters would be cheated, she took videos of the woman approaching various strangers and uploaded them on Facebook.

“Please beware of this woman everyone!

“She often lurks around at KL Sentral railway station to prey on the compassion of people and scam them.

“She will tell commuters that she does not have enough money for a ticket and ask from them money.

“I’ve been working here for 10 days and every day, she would repeat the same thing all over.

“I have informed the police and they told me that the woman is a known suspect who is spotted frequently at the station.

“They also told me that each time officers approach her, she would turn tail and walk away in the opposite direction.

“Hope that everyone will be more vigilant and not let her capitalise on your compassion and kindness.
“Don’t get scammed by her if you meet her at the station.”

Another Facebook user, Huiwen, took the chance to share about her encounter with the same woman, saying:

“I met her before too!

“I was eating at a fast food restaurant when she came over to my table and asked me for money, saying that she did not have money for a meal.

“She kept eyeing my wallet as I took out the money.

“I don’t understand her at all.

“Her body is intact and she isn’t that old, so why must she beg for money?"

Other netizens have also rallied behind Shi Wei, slamming the woman for her actions.

So beware if this woman approaches you at the train station the next time.