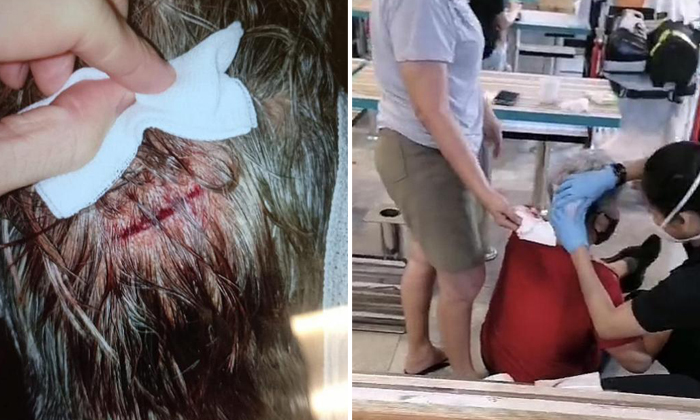 A 68-year-old woman ended up with three stitches on her head after she fell backwards and hit a table in a coffee shop.

Ms Hui Khuan Heng, a retiree and Willing Hearts volunteer, was with her friend at Yong Li Coffee Station in Eunos Crescent yesterday morning when the incident happened.

Ms Luo Yi Qin, a stallholder, told The New Paper she was serving customers when she heard a sound and saw an elderly woman sitting on the floor with her head bleeding.

Ms Hui's friend, Ms Loo Siew Lan, 70, was ordering drinks from the stall next to where they were seated and asked Ms Hui if she wanted coffee.

Ms Hui turned to her left to decline and then fell backwards and hit her head on the table behind her.

"I was not scared when I fell because I fall often and when that happens, I will see a doctor," said Ms Hui.

But Ms Loo realised that Ms Hui had a 5cm wound at the back of her head and was bleeding badly.

She pressed tissues against Ms Hui's head while another customer called for the ambulance.

The Singapore Civil Defence Force received a call for assistance at about 10.15am and Ms Hui was taken to Changi General Hospital.

Ms Hui was sent home at around 2pm after she received stitches and the doctor deemed her well enough.

The manager of the coffee shop, who wanted to be known only as Mr Chong, 40, said the benches are about 10 months old and that the coffee shop was renovated last February.

He said: "We hope she will be fine and we will reach out and communicate with her to discuss what can be done and how we can compensate her.

"We will be more strict in checking the work done by the contractors to make sure it is safe."