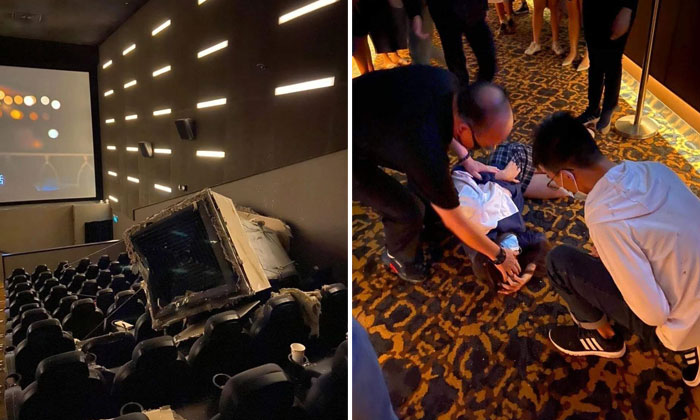 A ventilation duct fell from the ceiling of a cinema hall at Nex shopping on Sunday (Aug 30) during a movie, injuring two people.

A Shaw Theatres spokesman said the duct in Hall 6 was dislodged at around 4.45pm.

Theatre staff tended to the injured customers until paramedics arrived, he said, adding that the two were later taken to the hospital.

"Our priority is to provide support to our injured patrons," said the spokesman, adding that the company is working with landlord Gold Ridge and the authorities to investigate the incident.

The cinema at Nex will be closed until further notice, he added.

The Singapore Civil Defence Force (SCDF) said in a statement that it received a call for help at the mall at around 4.45pm, where two injured persons were taken to Tan Tock Seng Hospital.

No other injuries were reported, it added.

The Straits Times understands that all the cinema halls were evacuated, and patrons were asked for their names and contact details for their tickets to be refunded.

In photos contributed by a moviegoer on website Mustsharenews, the dislodged ventilator was seen falling from the ceiling, and lying across several rows of cinema seats on the right side of the movie theatre.

Other images showed SCDF and paramedics attending to injured parties, where one customer was seen lying on the floor, and someone being taken away on a stretcher.

A Building and Construction Authority (BCA) spokesperson said that one if its engineers was sent to investigate the incident at 6.30pm.

In the meantime, the cinema has been instructed to close, pending further investigation.

“BCA has also instructed the building owner to appoint a professional engineer to carry out a detailed investigation of the incident, inspect and assess the condition of the other ducts in the cinema, as well as recommend rectification measures to be carried out by the building owner”, he added.

One of the customers, who only wanted to be known as Ms Vivian, was watching the Tenet movie with her family in another cinema hall when the incident happened.

“The lights suddenly came on for a few minutes, but the movie was still playing so we thought it was nothing serious. But when the movie suddenly got shut off, some people got a bit angry and things were a little chaotic. Eventually, the staff told us to evacuate,” said the 24-year-old bank analyst.

“We’re very shocked by the incident and we probably won’t dare to visit that particular cinema (at Nex) in future, but I really hope the injured are fine,” she added.

When ST arrived at the scene at 7pm, the theatres were half-shuttered.

Moviegoers were turned away, and given complimentary coupons to watch their shows at another cinema.

The coupons have one month's validity and can be claimed for any movie at any given time.

A customer, who only wanted to be known as Ms Sim, had tickets to watch Tenet at 7.50pm and was given a voucher.

"I don't have anything planned for the evening, so I'll be looking at other movie timings for Tenet near the area, perhaps at Seletar mall," she said.

Correction note: The Building and Construction Authority has clarified that its engineer was at the site at 6.30pm.